Not something you can control | Keywords GIG Follow-up

Another great Keywords for Video Game Studies session. Our topic last week was "POWER/CONTROL" and we touched on a wide variety of conversations under that broad heading.

The session began with the trailer for "Gamer," a movie about video games played with live avatars. The movie highlights tensions between having control over technology and being subject to power in the form of socio-political structures. We discussed how the movie fails to confront this tension because it characterizes "control" in terms of an opposition between the technological and the human. In the end, the film echos a logic of possessive individualism -- Kable overcomes implanted technologies to reclaim control of his body through shear determination -- that proceeds and succeeds despite the fact that, as head of the Humanz hacker syndicate warns us, the power structure in play "is not something you can control."

Kable's struggle to become a whole human exemplified the recurring concern about losing control to new technologies. Just as popular, however, is utopian excitement about their liberatory capacities, or gaining control through new technologies. Early conversations about the social impact of the Internet and hypertext for example. Gaming as well had a period in which freedom of movement in game was read as an expression of freedom in "real life." Here we had a brief discussion of the technological limitations that undermine or complicate what it means to "control" digital media. 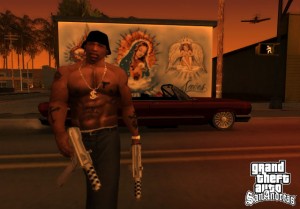 We played Grand Theft Auto: San Andreas for a few minutes as we noted the ways in which the apparent freedom with which we move through the virtual environment is structured by the affordances of the game's design. We also noted the constraints put on our "free play" by the authored representation of the game's characters and the real world identity positions manifesting themselves in the virtual world as cybertypes. This lead on to a broad-ranging conversation about Alex Galloway's discussion of gaming and algorithmic culture and his suggestion that even games with seemingly benevolent intentions like Darfur is Dying still participate today's digitally-enabled control society. 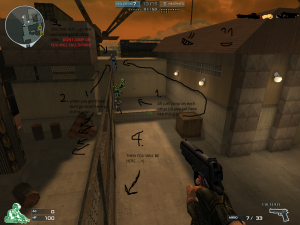 From the political implications of protocol, we moved on, like Galloway himself, to discussing exploits. Again our conversation was wide-ranging touching on hacking, glitching, cheats, countergaming, and non-gamic uses of game technology like speedruns and machinima. The point was made early on that because these practices are all permitted and enabled by the protocological nature of digital media, they are much more about social than technological. This was exemplified by the inconsistent and unpredictable status in gamer culture of different "cheats." Where some cheats demonstrate expert knowledge and get taken up as elite gameplay, others are almost universally deplored. Cheats, mods, exploits, and so on are in a sense a kind of meta-gaming, however the complexities of "gaming capitol" suggest there is much more going on than digital formalism.

As we look forward to our next session on "PEDAGOGY" we will certainly have a great deal to discuss. Much enthusiasm for games as educational devices focuses on interactivity as a vehicle to "empower" players to conduct their own learning experiences. Last week's discussion, however, demonstrates how complicated that proposition can be. The apparent "control" games grant players is mediated by a variety of factors from game design to socio-political context. Just how those mediating factors play into gaming and pedagogy will be a question for next session. Until then, we hope to keep our conversation about power and control in digital gaming going here.