To Code, or Not to Code.

That was the question posed by Matthew Kirshenbaum which summed up today's session, Labor in the Digital Humanities. Despite the broad range of questions framing the roundtable, the question that dominated discussion was how much technical ability is too much.

With a brief statement by William Thompson that described digital humanities as a 'confluence" of ways of knowing and one that is not necessarily harmless. As we continued, the particular "harm" that became the theme of the session was how technical proficiencies influence employment expectations.

Mark Childs, who joined the session via Skype, a first for the MLA, discussed the kinds of resistence he received from teachers asked to integrate technology into their pedagogy. The form of resistence he focused on were attitudes toward the digital, particularly ones that saw technology, such as podcasting, as possibily replacing the instructor.

Kathleen Fitzpatrick then discussed the influence of free and easy publishing platforms on academic research. She explained that print formats allowed researchers to outsource many processes, copy-editting, publicity, typesetting, etc, to the publisher. In a DIY publishing context, all that becomes part of the writing process and added labor. 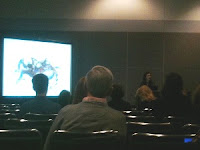 Tanya Clement next presented the "Antlion" a hybid animal she used as a symbol for the hybrid identity of the Scholar-Programmer. While the Scholar-Programmer typically sees herself as a scholar first, often turning down more lucretive careers to enter the academy, they are often treated as service workers, with unclear paths for career advancement, and ambiguous value as a scholar.

Carl Stahmer picked up the Antlion image and confirmed Clement's description with his own experience working in multiple digital humanities contexts. He summarized his position by saying "don't get stuck coding," having found that as his technical knowledge and experience increased the less he could see himself as a scholar or researcher. There is, as he emphasized, literally not enough time to be involved in all sides of DH projects and it is important to pick the part you want to be on.

Amanda French concluded the panel by explaining the ramifications of typical grant-funding structures on DH labor. The positions are available and usually well-funded, but they are also temporary as most projects are unsustainable due to how much they have to pay for labor. French went on to suggest solutions for working the system to gain more coding knowledge, such as using grant funds to pay for technical classes rather than for labor.

In the end the confluence of French and Stahmer's remarks lead to a discussion that questioned how digital humanists should become. While it seemed everyone agreed on the value of humanists involved in technology critique and practice, there was real concern over the burden of becoming proficient enough in programming, for example, given all the other demands on a humanist's time. This concern lead into larger questions about crisis in the humanities, which seems like the unavoidable undercurrent at this year's convention after just one day.