Immersed in Keywords, an Interactive Follow-up

The second Keywords GIG session is in the books. We want to thank everyone who came out and joined our lively discussion on Immersion and Interactivity. We especially would like to thank Dr. Lizbeth Goodman, director of the SmartLab, for attending our session and telling us a little about  her work, her colleagues and their work, and what they are cooking up over at UW Bothell's Center for Serious Play.

The session began with a viewing of Peter Molyneaux's presentation of Milo and Project Natal at the E3 2009, which brought our conversation immediately to the fundamental question, "what do we mean by 'immersive'?" As Milo's friend Claire, splashes around in a virtual pond, we took Janet Murray's classic definition as a starting point and as Molyneaux blames the controller for getting in our way, we turned to Marie-Laure Ryan to differentiate  immersion from interactivity. 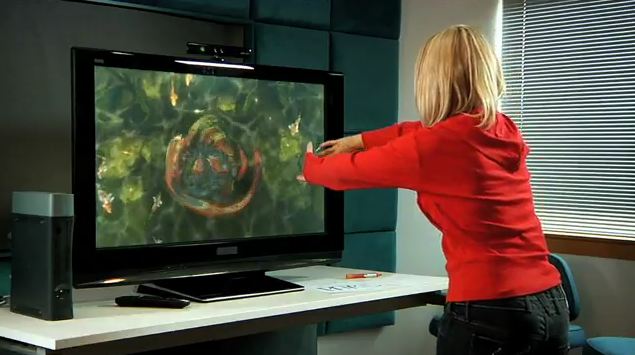 "There Claire is. She's in Milo's world. She's in that pond" - Peter Molyneaux describing Claire's experience of immersion.

This lead into a discussion about the relationship between immersion and training. Immersion seems to require a lot of interactivity to be somewhat automated. We noted how the supposedly "natural" interface of Natal,released early this month as Kinect, disciplines its participants into expected and practiced actions.

At this point we had to make a distinction between interactivity and interface, which initiated a discussion of the assumptions the Kinect's interface makes about its user's interactive abilities, who the design excludes, and the kinds of embodiment it validates.  While acknowledging  the role of political economy in this design decision, we also recognized how the "natural" and "immersive" interface of motion controls are often pitched as making games "for everyone."  The rhetoric of easy interactivity frequently accompanies so called "casual" games. This raised questions about whether Csikszentmihalyi's concept of "flow" might be problematically normalizing. In particular we analyzed Jenova Chen's charts and visualizations, which suggest a consolidation of gamer affect into a single pleasure-seeking trajectory with little capacity to register creative variations. 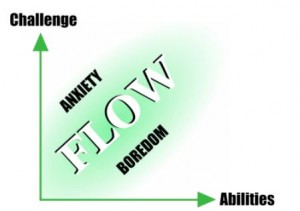 Here we attempted to make another distinction between immersion and engagement, remembering there still has to be something compelling about what a game asks its players to do. This gave way to a discussion of counter-gaming, machinima, and all the ways in which players engage with interactive media beyond a designer's intentions. After all, interface and interactivity are about a set of affordances, as Johanna Drucker might have said, and new technologies open new possibilities for compelling and significant experiences. Talking about these affordances and what they allow "you" to do, we wondered to whom that "you" refers. We concluded, it is an educational address that presents possibilities for a communal or co-produced interaction, which tries to avoid making assumptions about "your" experience or the way "you" will play.

Thus, despite devoting a large portion of discussion  of problematic and worrisome trajectories of immersion and interactivity, the session ended with hope. Dr. Goodman showed us in the example of her colleagues and former students the exciting and important work that can be done when artists are teamed with engineers to develop projects from the ground up. We concluded, then, that our challenge as scholars, educators, and collaborators is to expand the prevailing technological imagination to see graphics, gameplay, narrative, platform and culture as all integrated and in this way rearticulate "immersion" and "interactivity" in ways that aren't predicated on photorealism or one-to-one motion control.