My project, Str@nger, is an Android app for anonymous communication via smartphone. In general, I find that I am often unprepared for or unappreciative of interactions with strangers. As a result, my app seeks to help its users cultivate an appreciation for the unfamiliar, and to encourage strangers to regard their fellows as potential friends, regardless of context or commonality. It takes the form of a typical mobile messaging app - its user interface is simple and clean, reflecting the decontextualized nature of the conversations it provokes. In its final form, it will be available on the Android app store - I hope that people will use it in order to gradually become more comfortable with talking to strangers without the aid of a smartphone.

The home screen of the application contains only three buttons: the top two are used for toggling stranger matching through contacts or location. When a user first opens the app, a popup appears explaining the concept and encouraging users to select both options. 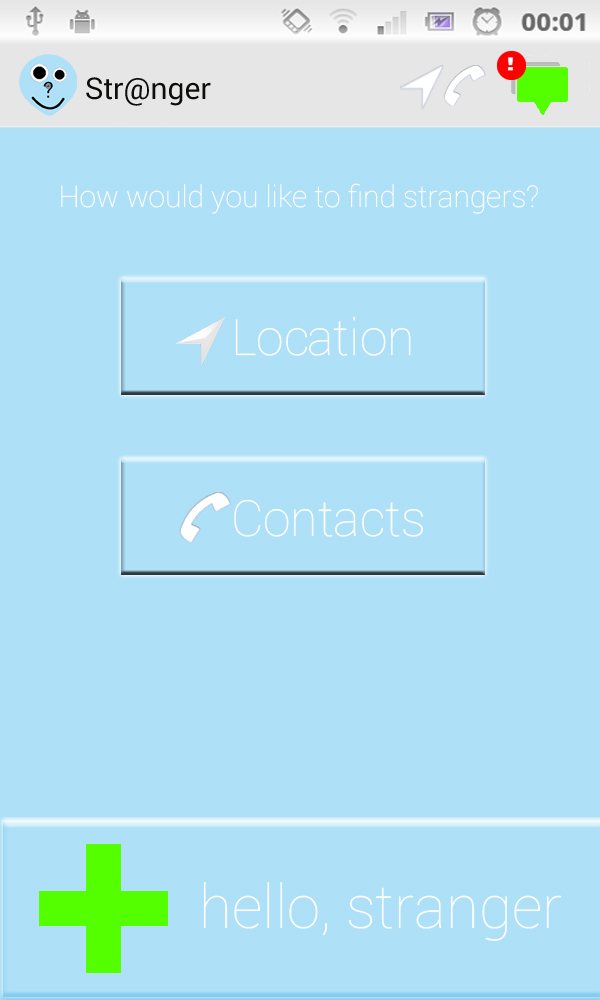 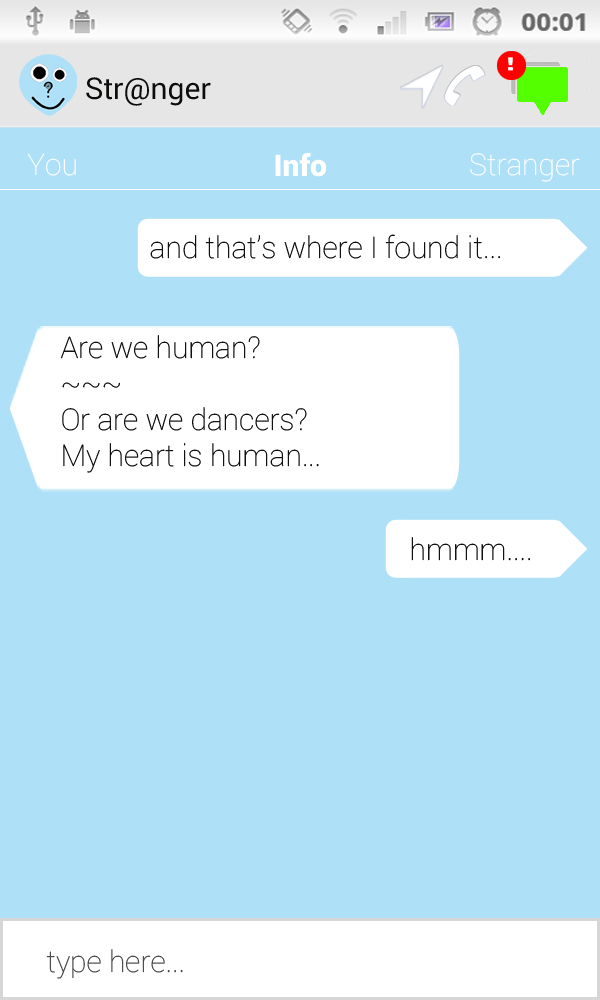 From there, the rest of the interaction is pretty much up to the two strangers. Chats are persistent over time, so interactions might go on for quite some time. When a user wants to look at all of their conversations, they can press the speech bubble button and return to a list of them 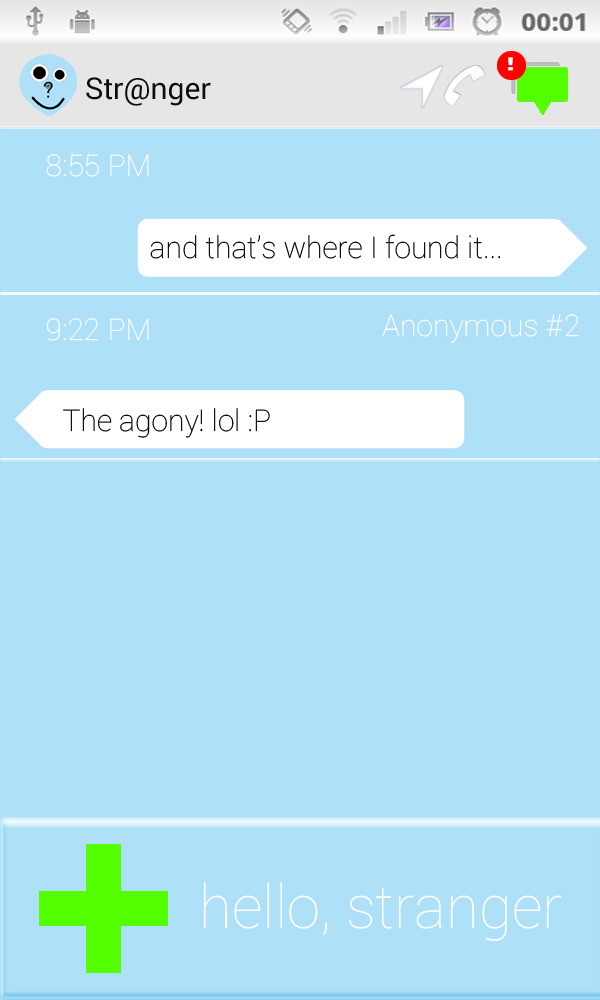 My app seeks to address questions about the nature of our social interactions in the digital age. As we become more connected to our friends, as we become able to easily connect with people we share things in common with, do we lose our ability to step outside our social networks? Does the advent of the smartphone mean we need never turn to the person next to us for advice or entertainment, friendship or support? If we listen to our mothers and “don’t talk to strangers,” what is the human cost in diversity of opinion and circumstance that we miss out on? And how do we reconcile that lost with the strange way that our society romanticizes meeting strangers? Inspired by readings such as Rita Raley’s Border Hacks, N. Katherine Hayles’ How We Became Posthuman, and Kara Keeling’s I = Another, my app plays with the tenuous borders between our social networks and our inhabited space, and draws attention to the largely dehumanizing way we treat strangers in our daily lives.

While the history of the Internet is littered with many other programs for facilitating low-investment anonymous conversations, and smartphones are becoming positively laden with anonymous chat apps, my app has a few key distinctions. Firstly, the conversations are direct one-to-one chats. There is no group chat functionality, and I don’t plan on adding it in. By requiring that all communication be direct, I hope to prevent some of the more poisonous interactions that occur on these sites, perhaps resulting from the Greater Internet Fuckwad Theory (GIFT). By keeping the trappings of these conversations as simple as possible I hope to encourage a broad variety of different interactions. Secondly, my method for matching strangers together in conversations is unique. There are two options for finding strangers to chat with: to use contacts or your location. In the ideal use case, with both of these options enabled, there is no way to tell programmatically whether your relationship with the person you are talking to is geographical or preexisting. By inducing an element of uncertainty into the context of relationship between the strangers, I hope to encourage users to remain politely engaged in each others’ company. While much of my app’s aims are met through decontextualization, in this case it is not a removal of context but a deliberate obfuscation thereof that attempts to influence the style of conversation. By casting existing friends (who presumably inhabit ones’ contact list) as strangers and mixing them up amongst actual strangers, I am attempting to encourage users to treat strangers as friends. Thirdly, after an algorithmically determined quantity of meaningful communication has been engaged in, the app will allow users to (given mutual agreement) remove the cloak of anonymity, introduce themselves, and begin to turn strangers into friends. By making it easy to initiate decontextualized, thoughtful conversations with strangers on a mobile, I hope the app will teach its users to feel comfortable reaching out to strangers in real life, so that someday, in some oppressively silent train station, a person will look down at their phone, decide to try out my app, and chat with a stranger. After a few minutes, she realizes that the person she’s chatting with is actually sitting next to her. As their excited voices break the silence, the rest of the people in the station strip off their clothes to reveal shiny unitards and burst out in song. The pair become lifelong friends, and the next time our heroine is sitting in a quiet train station, she looks the man across from her in the eye and says “Hello”.

The app is written in Java, but using libraries specific to the Android Software Developer Kit (SDK). Matching strangers makes use of Location Services and a user’s Contacts directory - access to both are provided by the Android SDK. In addition to the app itself, there is also a server component which uses Amazon Web Services’ EC2 cloud and Twilio’s API for matching strangers and distributing their messages, respectively. I developed both from scratch using Eclipse, an industry-standard Integrated Development Environment. In general, I dramatically underestimated the speed at which I would be able to learn Android development - I am disappointed to say that the app remains incomplete. However, I am sure that I will continue working on it this summer and I expect to release it on the Android app store once I am finished.

Screenshots of the work in progress: 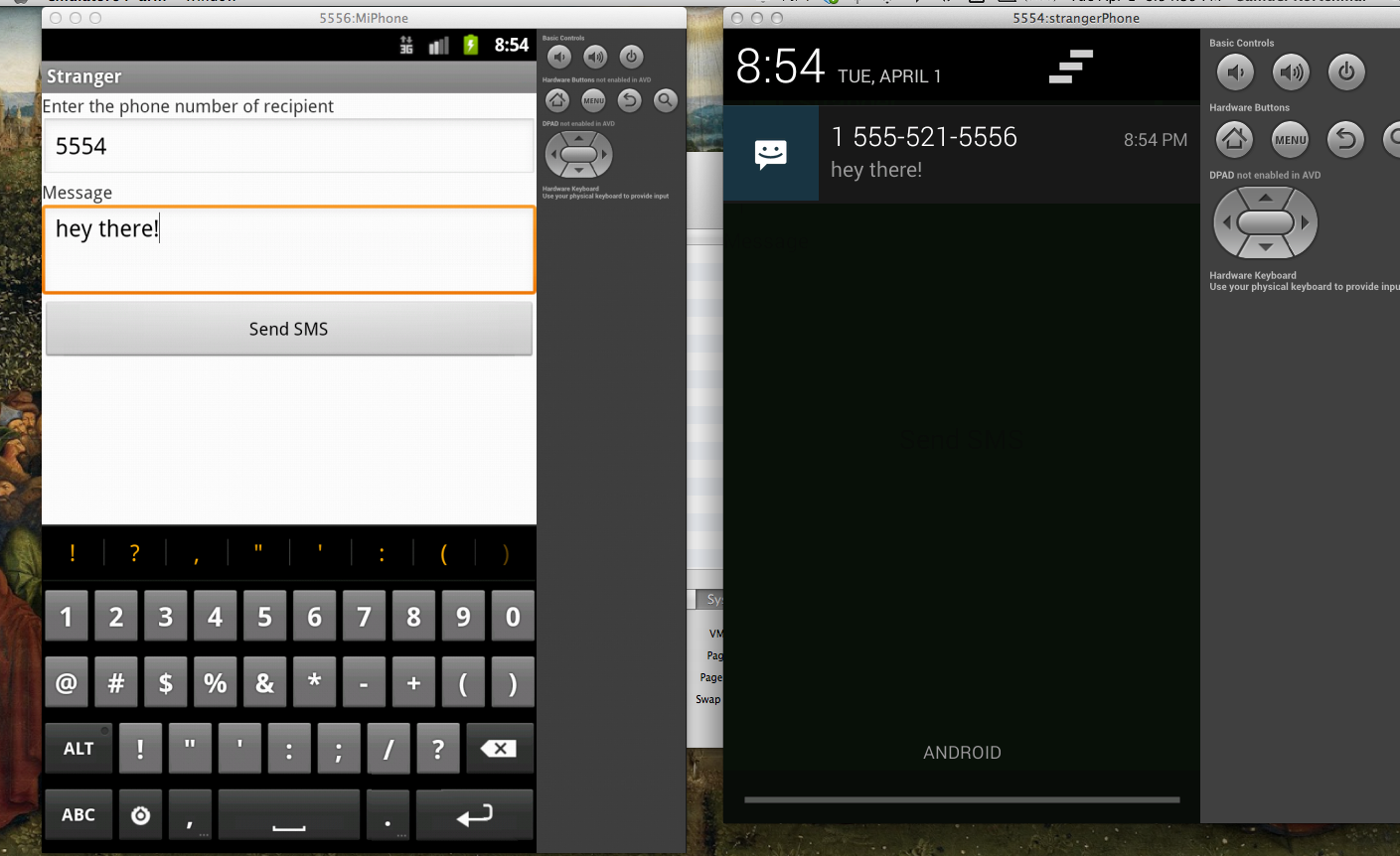 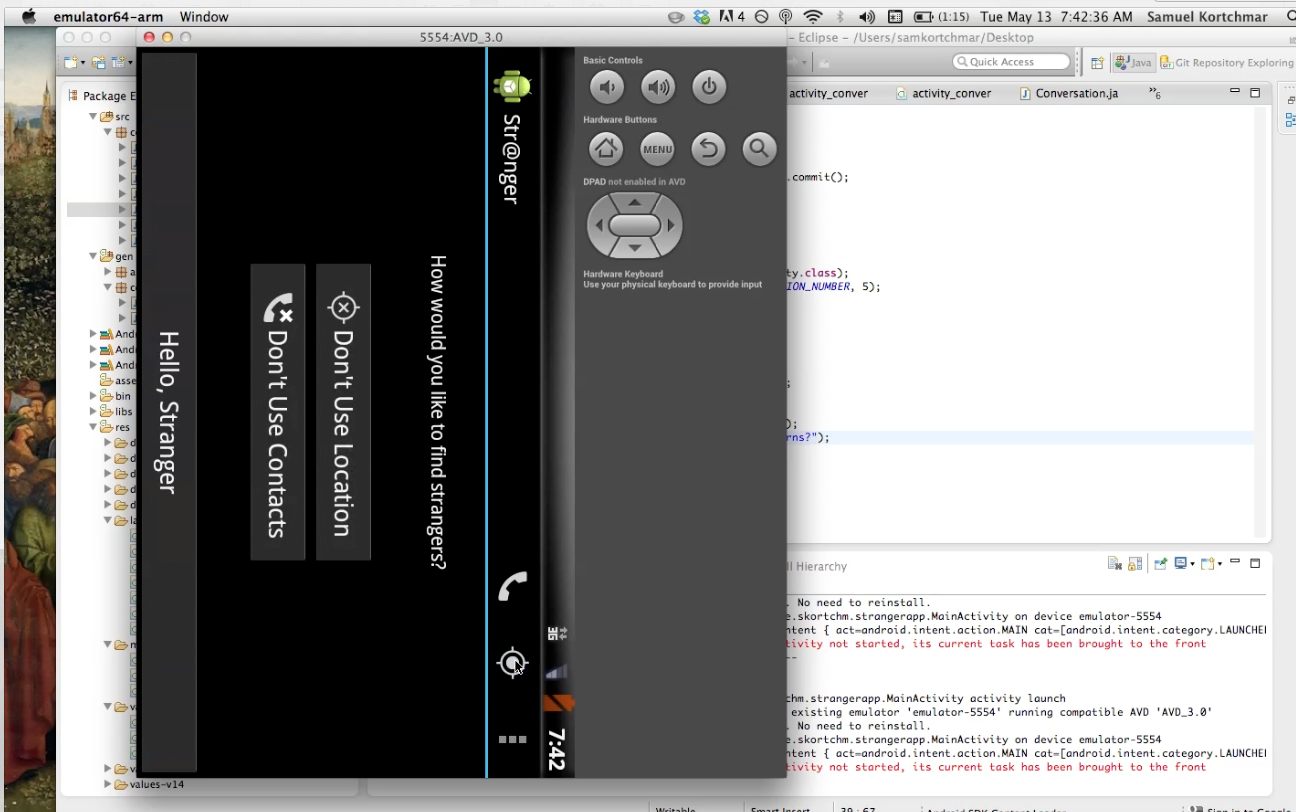 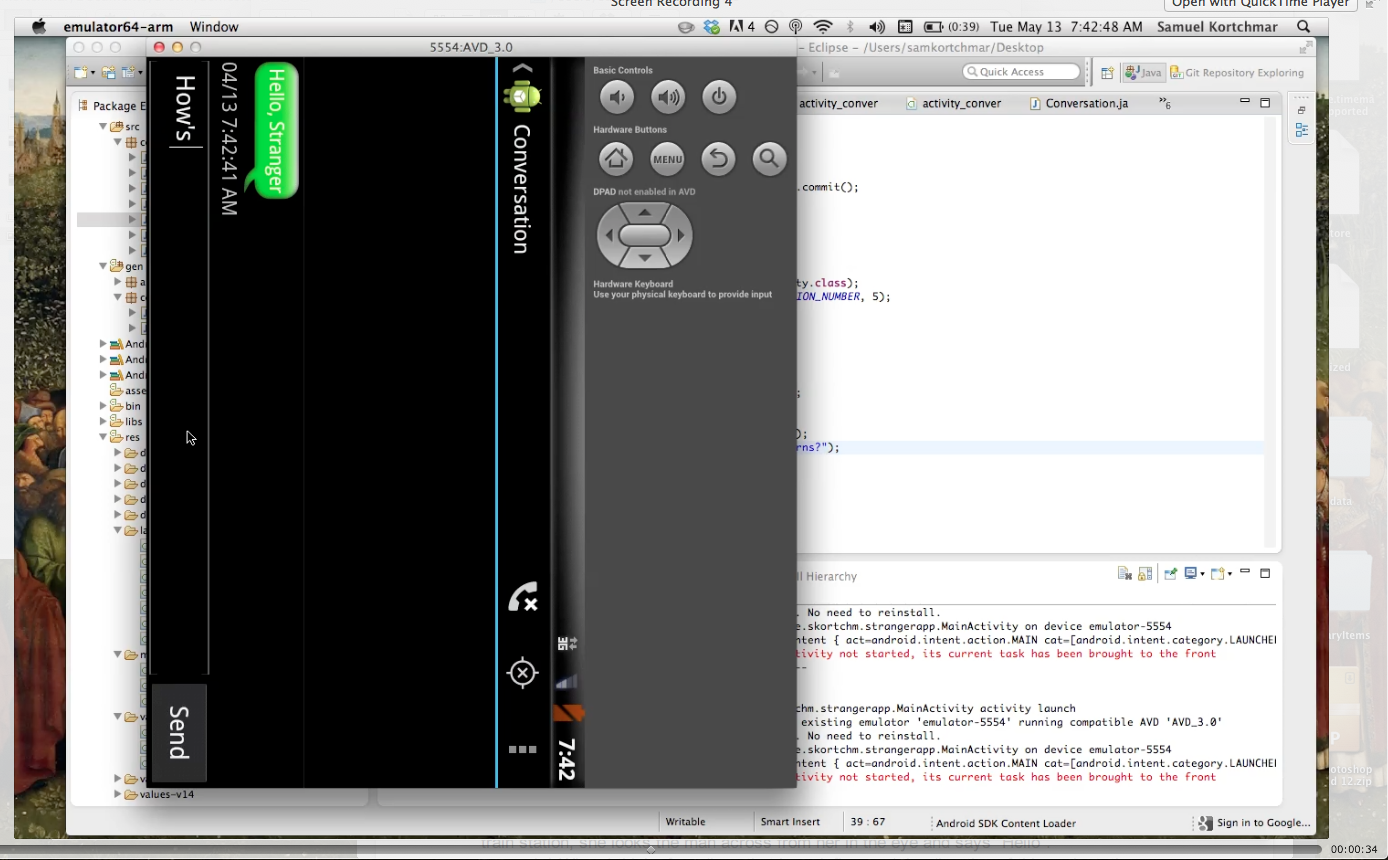 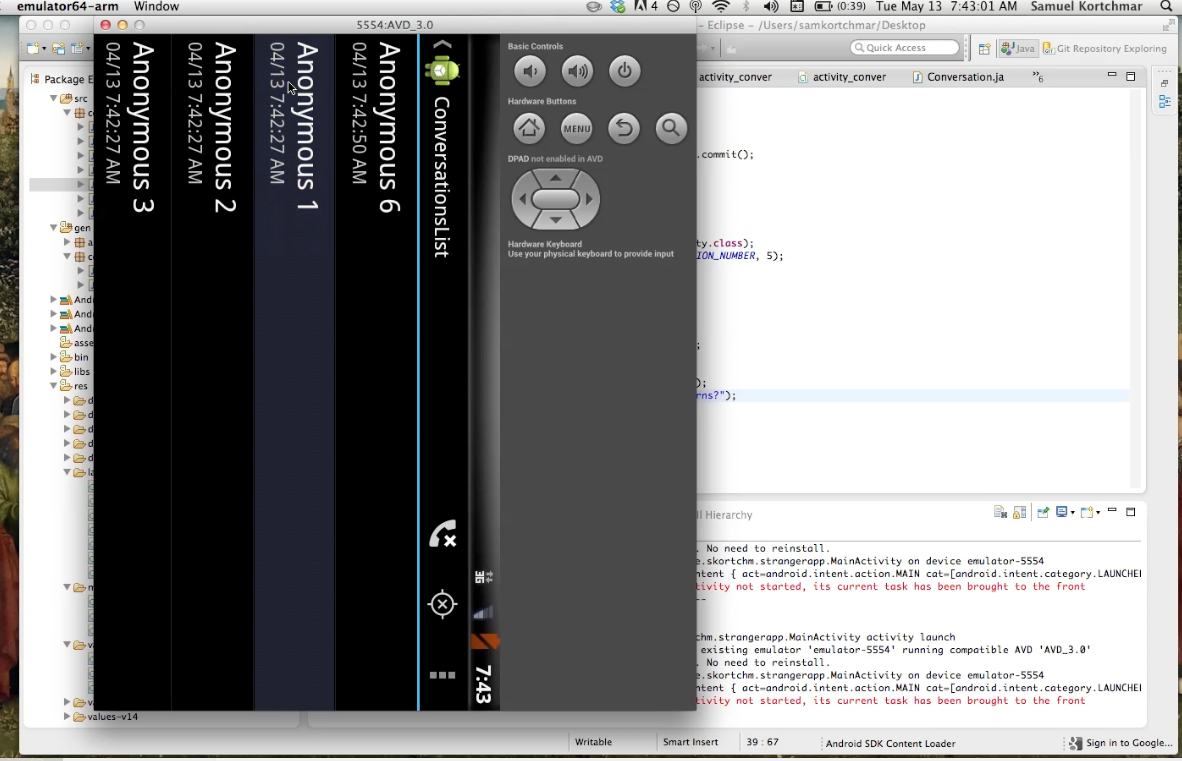