The Many & the One

Like many, Amos Doolittle struggled to turn in a decent first draft of American history. The 21 year-old engraver, later known as 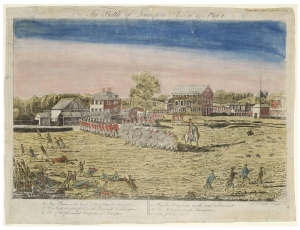 the “Paul Revere of Connecticut,” arrived in Lexington and Concord shortly after April 1775. Anxious to capture the battles’ actionand aftermath, he chatted with local residents. He sketched terrain. For Doolittle, a trained silversmith, it was a chance to experiment with a craft he had yet to master. Part of what he produced, a set of four views storyboarding the “shot heard round the world,” hangs in the Boston Public Library’s new exhibit, “We Are One: Mapping America’s Road from Revolution to Independence.” By Doolittle’s lights, Massachusetts makes for a furious and frenzied tableau: gusts of redcoats’ gunpowder hazing the sky, and colonial ranks splintering on the advance. On the American side, it is hardly a picture of union. Patriots scatter, racing blindly to frame’s edge. In his rough draft of Revolution, Amos Doolittle demands that we unlock all hopes of what might come next.

Maps, like manuscripts, are lunges at interpreting live history. Mapmakers study and present distinct landscapes of knowledge and power; their views deserve a critical eye. That theme ripples through “We Are One,” reenergizing the familiar stories on display. “We wanted to show the war itself. We wanted it to be more than the battles,” said Ronald E. Grim of the Norman B. Leventhal Map Center, who curated the exhibit with Stephanie Cyr and Allison Lange. In partnership with a fleet of institutions including the British Library, Library of Congress, Massachusetts Historical Society, and Connecticut Historical Society, the exhibit gathers 100 maps, artifacts, and views charting America’s political upheaval. Rounding out the experience is an excellent digital Portal of 2,000 related map images harvested from John Carter Brown Library, William L. Clements Library, American Antiquarian Society, Harvard Map Collection, and Osher Map Library. The Portal lists standard provenance details for the maps, then ventures farther, providing georeferenced overlays that invite you to swoop in on the details: try it here. Bending time and space, researchers can “slide” a map from past to present. A full suite of reference materials for scholars of all ages offers book lists, a glossary of cartographic terms, lesson plans, and a set of self-guided activities drawn from zoom-worthy maps (summer syllabus-makers, take note). Open in Boston until November 2015, this mobile “atlas” of independence travels next to Colonial Williamsburg (February 2016-January 2017), and continues on to New-York Historical Society (April-August 2017).

Scrutinizing cartouche and key, “We Are One” builds new suspense into a well-told tale. In the tradition of scholars like J.B. Harley, David Woodward, and Martin C. Brueckner, the exhibit treats maps variously as images, vehicles, and artifacts of power. Split into four stages of American growth—“prelude to rebellion, Britain’s North American empire, the war for independence, and the new nation”—“We Are One” plots the overlapping orbits of colonial and imperial designs on the not-yet United States. An 18th-century constellation of American and European interests (trade, slavery, liberty) converge, drift, or clash. Highlighting Boston’s role in the Atlantic World, the maps recreate the pulsing world of colonists driving toward citizenship. As local surveys cede to a federal template—toggling from “one” to “we”—cartographic culture cues up a republican dilemma signaling civil war: Where do states’ borders (and rights) really end?

Within the “prelude” and “empire” saga of “We Are One,” Boston begins cartographic life as a far-flung imperial outpost, easily dwarfed by the majesty of metropolitan London. John Bonner issued the first published map of Boston in 1722. Over the next half-century, his partner William Price revised it to convey Boston’s rise as a key port. Near Bonner’s and Price’s work sits bales of evidence evoking the products sold there—rice, cotton, indigo—to fill colonial pockets. By 1776, the city’s livelihood was under siege, and Jean de Beaurain’s map snapshots the onset of revolutionary struggle here. Basing his topographical interpretation on the labor of British engineers, Beaurain trims his 1776 map of the city with a remarkable cartouche. In the Frenchman’s first draft of American history, a Native American peers to watch two men, American and British, vie over a flagpole bearing the iconic Liberty Tree image. Who, exactly, is the American “we” shown in this vignette, according to “our” mapmakers? Next, the exhibit’s wartime narrative leafs through the views and arms that seared cultural memory of revolutionary events, well into the 19th century: Bernard Romans’ Romantic take on the Battle of Bunker Hill, finely detailed powder horns made “in the defence of liberty,” Andre Basset’s prototype of a 3D-view of New York City on fire, and German engineer Sebastian Bauman’s map of Yorktown, hastily made in 1782 for presentation to George Washington. Finally, bridging map troves that document war and independence, the show’s true ideological currency drops into view. Amounting to “one-sixth of a dollar” and ringed with a maplike sundial of the colonies lies a worn bit of paper money, designed by Benjamin Franklin and issued by the Continental Congress in February 1776. Blazing outward, the sundial’s heart radiates with the motto “We Are One.”

By 1794, Amos Doolittle had found his historical “voice” on the page. So, too, had the small army of American mapmakers who give meaning to “We Are One”’s last section. A flip through the cartouches alone charts how templates of federal progress emerged. John Wallis’s 1783 map hardened state boundary lines, for example, but he took creative license in (literally) pairing American revolutionaries with classical ideals. In Wallis’s cartouche, Washington strolls with Lady Liberty while Franklin gets a literary assist from two goddesses, Athena (wisdom) and (blind) Justice. As a test canvas of American power intended for an 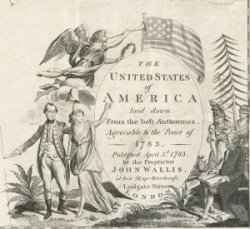 Atlantic (and mainly British) audience, Wallis’s elegant panorama packs an extra ideological punch. Mapmaking, as Americans realized, was crucial to nation-building. Wielding serious science and skill in the early republic, mapmakers imprinted a national cartographic identity that communicated American taste, scholarly erudition, and—most importantly—sheer endurance. They made money off the project, too. Mathew Carey’s pocket atlas guided settlers and speculators. With his best-selling American Geography textbook, Jedidiah Morse sought to give “authentic information” and diminish reliance on the European mapmakers who prized “fancy to supply the place of facts.” 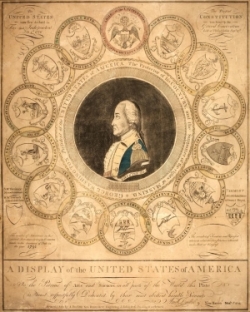 had built up around new ideas of what constituted American community. Party rivalries led many to push back at the scope of federal motives and measures. Maps and views offered another cultural language for discussion and dissent. Amos Doolittle’s 1794 engraving, A Display of the United States of America, drafts a brave new republic of hazy and high-flying goals. Patriotism and politics converge in Doolittle’s Display, which boasts a transatlantic backstory of British mapmaking and French artistry. Unabashedly nationalistic in subject and tone, it’s worth noting that this Display is by an American engraver who intervenes to produce a unified vision of the nation for a French audience. Washington, encircled by states mirroring the unity suggested on Franklin’s money, gazes out in profile. Within the frame, Doolittle points out horizons of national growth, showing the stately roll of Niagara Falls and street plans for the capital city of Washington, D.C. Surety and optimism now guides the seasoned engraver’s hand. Call it bookend or springboard, but in a room filled with Revolution, Doolittle’s Display gathers the hopes of many in one view.