In September, a new video game will launch called Mission US. Produced byTHIRTEEN with funding from Public Broadcasting and the NEH, Mission US is intended for school children to engage in lessons of American history through a computer game, taking on the roles of various young people on the edges of major events in American history. The demo version is available right now, and it allows the player navigates the start of the American Revolution.

I wouldnt have been aware of this game if it hadnt been for Alisa tweeting me this article from the Financial Post. Take a moment to read the article, because theres a bit in that explains why Im talking about this here. Im not an American history scholar (though, years ago, I wanted to teach American History at a high school level), and while I like engaging and educational games (and Mission US is engaging, if a little spotty on the pedagogical aspects), this normally isnt the type of thing I address.

From the article: The stylized approach to design used in Mission US has the flavor of anime and 2D casual web-based games that have grown in popularity as alternatives to console games. This is the assertion that grabbed my attention (and Alisas as well, since she sent it to me), and what spurred me on to play through the first mission this afternoon in my insomniac daze.

Mission US isnt really all that anime-flavored. The character designs have the relatively blank face, with few distinguishing features that tends to be associated with anime, but can also be traced to early Disney animation (Snow White and Cinderella are fairly non-descript despite being perceived as pretty). And while Royce, the fiery apprentice who works at the wharf, is a bit of a bishie, none of the other characters really say anime to me.

All he needs is some sparkles or flower petals around him

Of course, the description of the game as having the flavor of anime mayve been the authors words or the press releases words, but points to the notion that saying something is inspired by anime is a way to appeal to children (and 40-year olds, too) and make them interested in the product. I dont really think that another anime is globally mainstream argument needs to be made here, but it does indicate that someone else thinks so.

Instead, I really want to focus on how Mission USs genre/format is constructed, and how this may be informing the supposed anime flavor. The article calls the game a 2D casual web-based game, while the games Web site refers to it as a both a role-playing game and an adventure game. All of this ultimately points to the game being bound up in a discussion of the immensely popular visual novel genre in Japan, which is often conflated with the graphic adventure game genre.

Visual novels are fairly easy to explain. Think of them as comic books with a bit more a Choose Your Own Adventure vibe. The images will be static (and if there is any movement, itll be very simple) with dialog boxes (see image below). The player is then prompted to respond to the dialog with a set selection of lines. The selection of dialog will often influence the events of the game, which in turn creates a high replay value as variations in the games route and its ending. 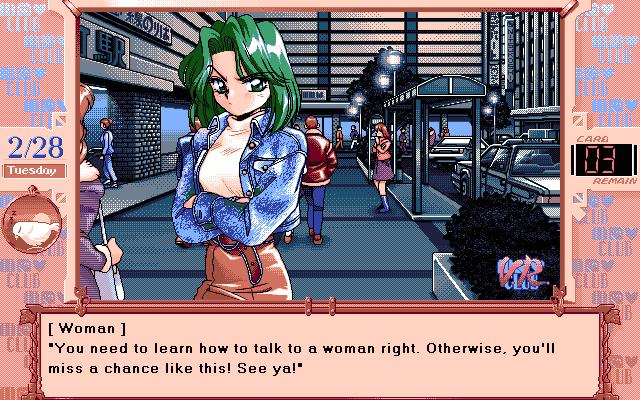 Very little will move, and the player won't interact with the image

Visual novels arent overly popular outside of Japan, where they make up the the bulk of released computer (not console) games. The term is often applied to what are actually graphic adventure games, which have a similar style to visual novels, the plateaus and static images with narrative selection, but involve pointing and clicking, inventory management, and exploration of the plateau. Popular games that fit this mold that have come to the U.S. are Hotel Dusk and the Phoenix Wright series, both on the Nintendo DS.

Mission US falls very squarely into the graphic adventure format. Using the cursor, players can explore rooms and cities, interact with other characters by clicking on them to spurt on discussion. Clicking on objects will cause a small window to appear that explains something about the object. For example, clicking on a barrel of sugar explains that sugar was a commodity in colonial Boston due to taxes levied on it. Exploration allows students to learn some details about the colony, details that can appear on a pop quiz (Cod, by the way, was a popular dish in Boston).

The selections the player make through the course of the game can affect how characters respond to the player. One challenge involves going around Boston and picking up items for a spinning bee. The player must, however, pick up the items from Patriotic merchants, not the Loyalist ones. The game provides a list of the latter in a newspaper so the player knows who to avoid while shopping. I avoided the Loyalist shopkeepers, though I ended up buying the indigo from a merchant whose politics were unknown, but my goalsetter was satisfied with him nonetheless.

Ive only played through the game once, being fairly neutral in my selections so as not to upset the NPCs. I never sided with either faction in my conversations with the NPCs since my experience with both visual novels and graphic adventure games point to such selections leaving the game a bit more open for exploration while more partisan approaches close off avenues, and I wanted to see of much of the game in one play through as was possible.

Selections allow for a range of opinions on the Boston Massacre

At the end of the mission, the player is given the option of going off with the British redhead Loyalist and becoming a a successful businessman, heading off to the high seas with a freeman, or staying in Boston and being a part of the revolution. Each selection has its own developments and roles you can play, very briefly, but will showcase the events of the American Revolution regardless of your choice.

Off to Britain with the redhead and her dog, Thimble...

...or stay and help the cause in Boston

As a result of all these things, I suspect that nature of the game play more than anything encourages this idea that Mission US is anime flavored, when really the format of the game implies a perception of anime-ness (possibly Japaneseness?), whether it be on the behalf of the producers to market the game or by the article author showing a lack of knowledge about the issues at hand.

Im considering a second post about the game from a pedagogical perspective, but well see if I have the time for that.

[x-posted to my personal blog]