#QueerDH Then Not Now Blurring Dichotomies

cross posted from my blog

I want to thank Cathy Hannaback and Philly Queer Media for inviting me. This talk starts out with a shout out to Max Probst. It was a fortunate day when he agreed to be the graduate assistant for the Women’s Center at WPUNJ when I was director there. He taught me far more about queer theory than any book ever did.

Unghosting Apparitional Lesbian Histories began with Audre Lorde. As I followed her through the conferences of the late 1970s, I kept bumping into shadows. Lorde, relegated to the role of "commentator" at the closing session “The Personal and the Political” of the 1979 conference The Second Sex Thirty Years Later delivered a stirring denunciation. According to her biographer Lorde's remarks referred to "papers written by Linda Gordon, Camille Bristow, Bonnie Johnson, Manuela Fraire, and the conference coordinator, Jessica Benjamin. Some of these names were well known to me from my reading of feminists inside academia, but others, like Johnson and Bristow I’d never heard. Bonnie Johnson and Camille Bristow gave a paper "Both And" described as "reflections on being black feminists." Was Lorde criticizing them?

As I traced Lorde's now infamous remarks from audio tape to feminist periodicals and into the polished essay "The Master's Tools" it became clear that in transforming remarks written about a specific panel into a published piece, Lorde took out Johnson and Bristow's names, along with all others to focus her critique. Camille Bristow I identified easily, but Bonnie Johnson, with her not uncommon name, proved more difficult, a sister/outsider living in the footnotes of academic books. While I’ve done lots of academic writing with the input of activists I wrote about this project became an experiment in discovering exactly what I could find out about one person in the trove of the internet.

Unghosting Apparitional Lesbian History was born from frustration. Where are the stories of the thousands of grassroots activists who participated in women's liberation? In Unghosting Apparitional Lesbian History I explore the internet in search of one woman, the sort of person who doesn’t have papers in a named collection, but who appears scattered throughout resources that also are seldom in one physical location. The internet offers the tantalizing possibility of rendering these physical and geographical restrictions moot, but how much of that promise is fulfilled? Unghosting apparitional lesbian history presents the traces in a multimodal project using a range of digital tools. 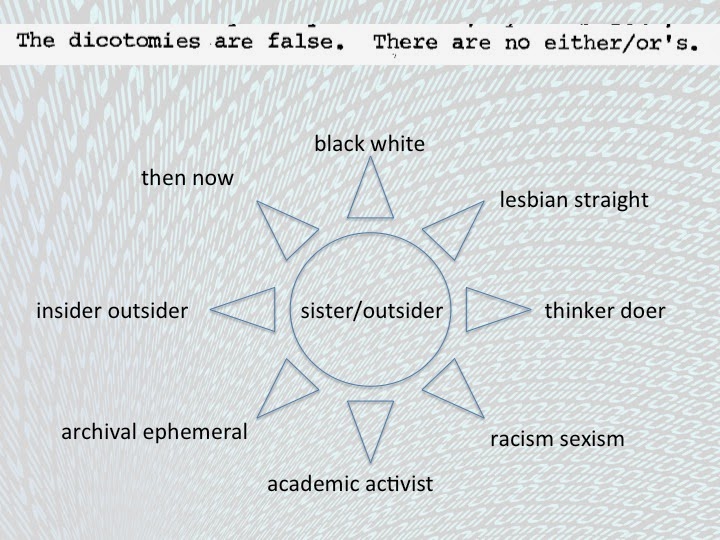 The lesbian is never with us, it seems, but always somewhere else: in the shadows, in the margins, hidden from history … why is it so difficult to see the lesbian –even when she is there, quite plainly in front of us? Is it in part because she has been “ghosted” – or made to seem invisible – by culture itself? Terry Castle A Polemical Introduction or the Ghost of Greta Garbo

"According to Lorde the outsider whom we reject is, in fact, a member of the family" Joan Wylie Hall,Conversations with Audre Lorde

Outside the “academic colony,” Jewelle Gomez, Evelynn Hammonds, Bonnie Johnson, and Linda Powell joined me in 1983 in a five-woman dialogue called “Black Women on Black Women Writers: Conversations and Questions."

History making is an irretrievably dichotomous process - the past is past - except of course when it isn’t. As I prepared the remarks for today, I was also following with avid interest the debates over the papyrus known as the gospel of Jesus’ wife. I found in particular, the open letter to historians written by Brice Jones to be provocative in terms of thinking about history making. 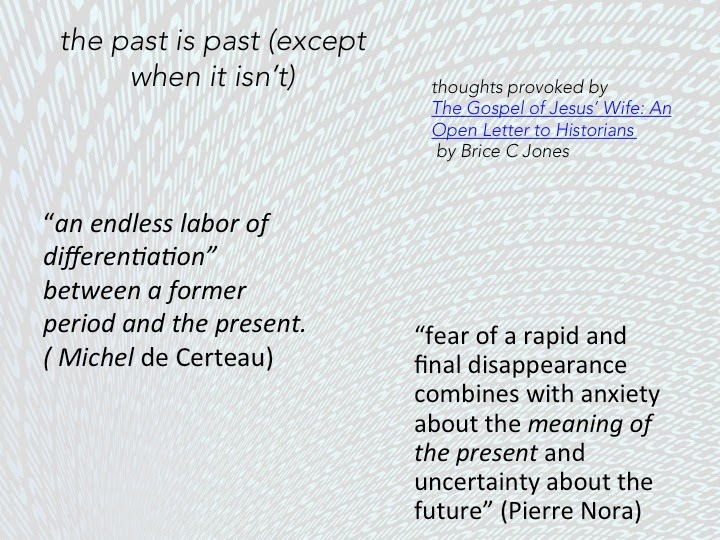 What anxieties about the past are revealed by my search for Bonnie Johnson?  How do pastpresents collide, to borrow Katie King's neologism, in exploring historical issues of race, sexuality, class, and status for feminists in the present?

In particular, I wondered how I could wander productively in the space between techno Utopianism and techno skepticism. Techno Utopianism rests on the belief somehow the digital carries with it the means to not only overcome erasures, disappearances and/or silences, but magically also the oppressions/biases that cause them. Pushing back against that is digital skepticism the belief that nothing online is “real” as if the word worlds I digitally (waving fingers) digitally make exist in a noplace space.

To bring this all back around to something more concrete, building on Trevor Owens' four flavors of digital humanities I’ve described elsewhere what I call the 4ps of digital works in history makingpresenting, programing, and producing and preserving.

For example, here were have a project  Mapping Queer Philadelphia  by Brian Trump done in Deb Boyer’s grad class at Temple. He took 1977 guide to gay Philadelphia, coded the locations, and put the sites on a map - sorting out and visualizing different sites of knowledge production we might say. 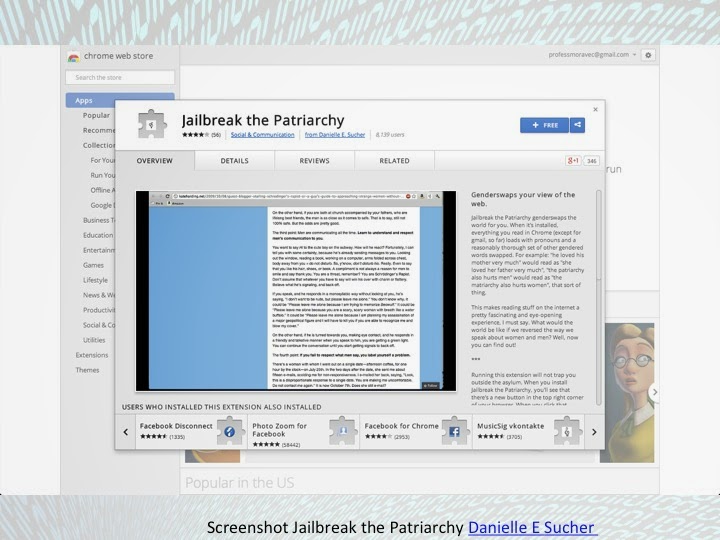 Here is a screen shot of jail break the patriarchy a browser extension that flips prounouns and gendered nouns in a website. 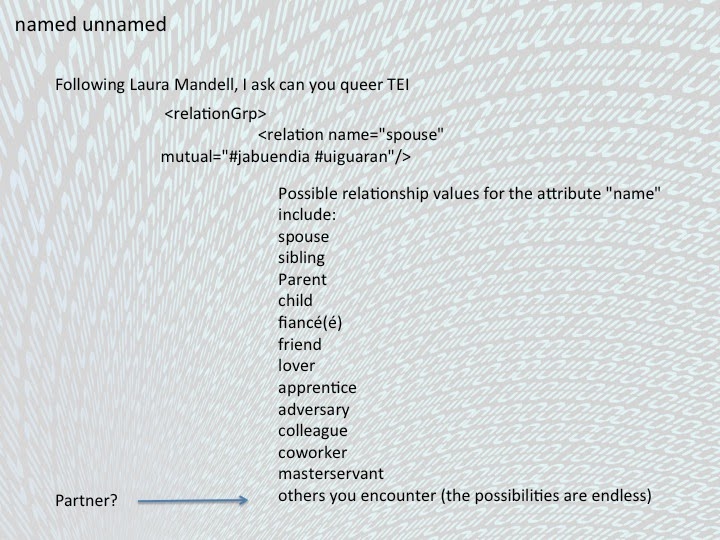 Similarly, following Laura Mandell I ask how do we program for history? Can we queer TEI? The office "guide" holds out that the possibilities may be endless, but how do we encode that which we struggle to name inside a controlled vocabulary?

How we label these things matters of course, not only for the ability to produce projects, but for the ability of people using projects to see themselves inside them.   That leads to me think a lot about what kind of user experience do we want to create in digital projects with for of around activism? I chose to create this project inside Scalar because it allowed for a multimodal non linear version of history. However in keeping with the bend it until it (almost) breaks ethos of digital humanities, I wanted to further blur the categories set out by Scalar by creating a productively frustrating user experience meant to mimic my ghosting hunting in history. 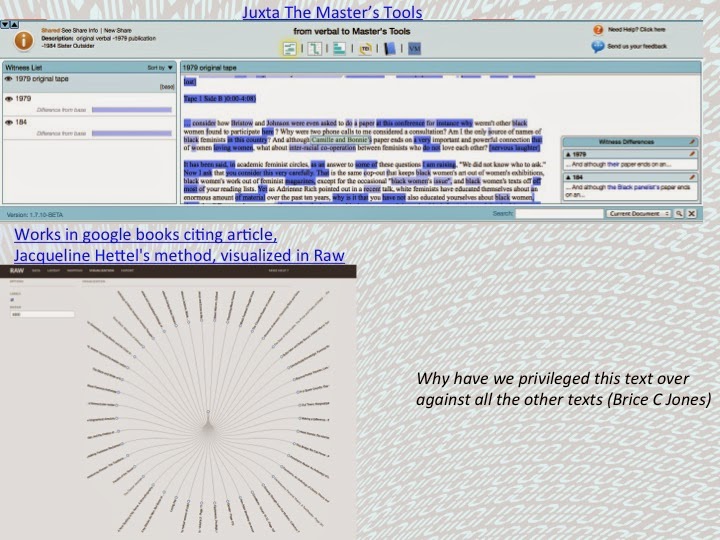 In terms of presenting history digitally scalar appealed to me for its ability to pull in content and push the reader out.  Rather than inserting footnotes, I grabbed pages from the internet and linked out to them.  I also pulled in a range of digitally produced bits of history one page I am able to embed a juxta that compares various versions of what became known as “The Master’s Tools” and a dendogram that visualizes all the works in google books that cite the article, of which Bonnie Johnson is one author “Black Women on Black Women Writers. “

These visualizations highlight a range of issues from what is THE text, why THIS text not THAT text, as well as my central issue how a text can be both central and ignored. 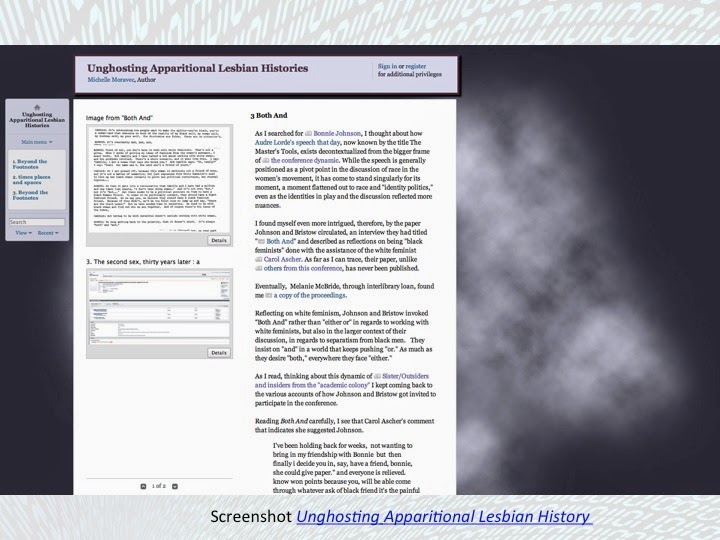 I also wanted to explore the question of why the pentalogue on black women writers is well circulated, while the trilogue of Bristow and Johnson along with Carol Aschr, is not. Here I pulled in WorldCat, which shows the proceedings of this conference, which include the paper, are held only in three archives. I also include a snippet of the digitization I did of this essay. Here I want to raise some the first of many ethical conundrums created by doing digital history. I obviously believe Both/And is an important piece that has been ignored. Do I therefore put the copy I have on the internet? I am well aware that it is only my privileged position as a professor with access to an institutional library and interlibrary loan that allowed me to read it. On the other hand, it isn’t my essay to share. 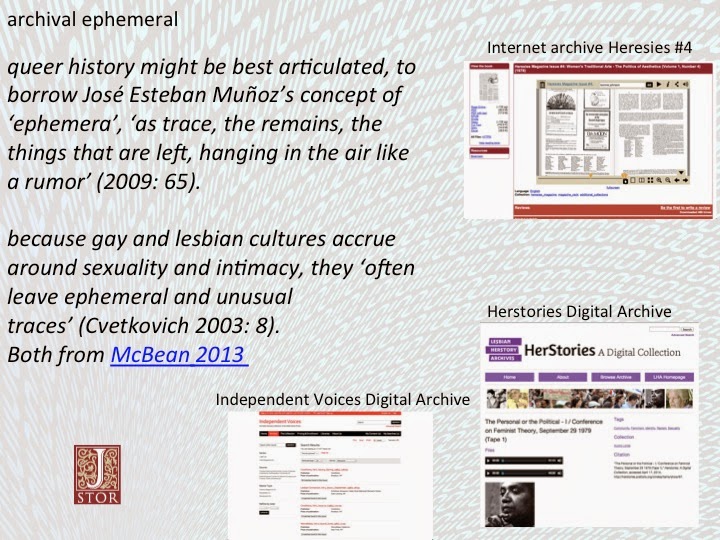 This brings me to the crucial issue of digital preservation. My project is possible because so many things have been digitized and put on the internet, yet at many junctures in the project I hit what I call dead-ends where materials are either not available online or have “disappeared.” In particular I relied on three “non-academic” online repositories. The amazing Lesbian Herstory Archives (use them, love them, and most importantly GIVE THEM MONEY) has worked with at Pratt to create the online digital collection Herstories which contains many tapes of Audre Lorde, including the panel I write about here. and The Internet Archives contains OCR’d copies of Heresies, and finally Reveal Digital’s Independent Voices collection has digitized the women’s liberation periodical holdings of Duke and Northwestern. 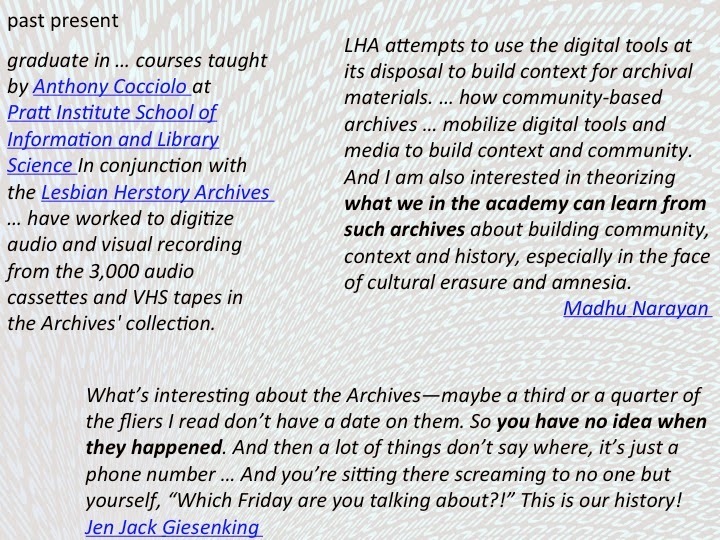 Issues surrounding LGBTQ archives have been theorized extensively as part of the “archival turn” in everything. However I want to bring this to really really practical question centering on the tension between the archival and the ephemeral. When I first began working in archives over 20 years ago now, the collection I worked with was titled “radical ephemera” all those messy leaflets and pamphlets left behind from social movements that were clearly important but fit no existing taxonomy and thus ended up dumped together in one box. Ephemera moves us into a time scale other than archives imply.    The ephemeral might also be said to be trivial, of the lower order of things, unimportant for knowledges. Considerable tension exists between the idea of history embedded in community archives from the 1960s and 1970s, the desiring subject in search of the self in the archive, and newer understanding of queer historiography, what I started with from De Certeau that history is moving the preserved remnants of the past into circulation with/of the present. Madhru Narayan’s lovely essay highlights the crucial community context of those ephemeral collections, most excellently exemplified by the Lesbian Herstory Archives, while Jen Jack Giesking’s cri de Coeur reminds us that these ephemeral traces were produced for, of, and by a very specific community. And it is this last thing I want to pick up on what are the ethics of digitizing &amp; placing online something that was at once both open to the public and for/of a group of insiders? Should LGBTQ archives be digitized and put online? (storify of people's opinions here)

This all matters. It matters a lot. There are amazing projects being made out of LGBTQ archives. E.G. Crichton Lineages for example pairs archives with artists. I love this, everything about it, but most of all, because it moves archival material out into circulation with the present. Sam McBean's Being There is another fabulous way that past and present interact.

crappy video of me talking that I shot here