As with all things digital, I find my projects overlapping a great deal, but today took me way back beyond the digital to some old school skills.   Right now I’m busily preparing an experimental project in Scalar for Ada.  As part of that process on the internet-as-archive I’m using the amazing Lebsian Herstory Archives (give them money if you can. They are one of the last independent, community, not academically associated archives around) which has tapes of Audre Lorde speaking.

Way back in the day, I began as an oral historian and transcribed many of my own tapes.

So today, in order to do a more advanced comparison of the evolution of Lorde’s remarks in Juxta, which were first published as The Role of Difference in Off Our Back (December 1979), but eventually became The Master’s Tools (in This Bridge Called my Back 1981 and Sister Outsider 1984), I quickly transcribed the tapes, which sadly didn’t capture all of Lorde’s comments, due to the tape being flipped, but thankfully has the most important parts, her invocation of the master’s tools.

It would seem like there should be some quick digital method, but these are old tapes, scratchy with background noise.  No matter because as I rewind and type, rewind and type, in that old familiar rhythm, I listen to Lorde, again and again.

Listening to Lorde’s amazing oratory, and to the audience reaction (which I captured in the transcription) brought to life in ways I’d never experienced Lorde’s powerful words. 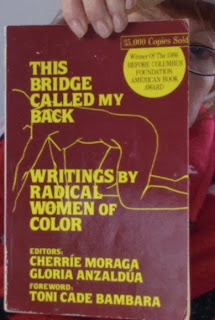 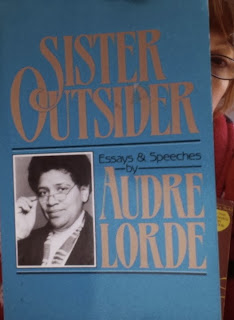 I am of the generation who literally grew up on Lorde.  I have, still today, the copies of This Bridge Called My Back, which was a text in my Introduction to Women’s Studies Course, and Sister Outsider, used in the feminist theory course.  Each of these books is worn, carried across the country and back in my various moves, but I’ve never been able to give either up, despite online access to most of the pieces in them.  They are for me, a tangible reminder of the days when I first grew to love feminism.

I hear Lorde, patient but firm, as she shuts down a woman (Jessica Benjamin perhaps) who tries to interrupt her.  I hear her call out the Italian feminist Manuela Fraire for the phrase “black beasts of dependency.”  I listen as other women come to the mic following Lorde’s comments, many in support of her. Eventually some members of the audiences’s patience wears thin.  There is yelling about stopping the “guilt trip” (tape1, side 2 around minute 36:25) to great rounds of applause, and then some faint shouting back that this is in response to the panel (36:57).   One of the conference organizers on tape 2, side 1 9:00-10:30 apologizes but then pleads "get down to work stop testifying and recriminating."  She also attempts to shift the issue from race to sexuality, as though Lorde has not just spoken about being a black lesbian feminist!

I can’t tell if Lorde has left the room after her comments, or if she remains.  There is someone who sounds like her asking “What is the theory of feminist racism?” and "Why is it that you don't know their [black women's] names?"(Tape 2 side 1, 30:15-31:30)

I listen --  the lesson I’d like to hand back in time to that twenty-something white feminist convert clutching her texts like a talisman.  Learn to listen and to live with the silences.