Any discussion of female oppression and vilification would be incomplete without including Lilith. You may have read of her as the villain, a succubus, mother of demons, a winged she-demon who preys on men and children, or a nocturnal force that delivers impure dreams. These are all stories of her, yes, but she started as a woman who refused to lay beneath a man on the grounds of gender hierarchy. In that context, Lilith was banished and punished for her refusal to submit to her husband, but she has been reclaimed and invoked often in the name of modern feminist power. In this blog, I will outline some of the mythologies of Lilith: where she came from, how she was viewed then, and where she ended up. It is vital that Lilith be included in this collection because she is the original madwoman. Her innate power and desire for equality are what led to her condemnation and usage as a warning to other women should they follow her path. To be reclaimed, she is a call to anyone who needs her. She is there to offer her power and strength to those who have had their power stagnated and suppressed.

Several realms of mythology include Lilith, either as the first woman or as a tempting demon. The most well-known in the Western world, from the Judo-Christian faith, Lilith was Adam’s first wife. In the story of Genesis, when God created the universe, he made both Adam and Lilith from the same dust, “So God created humankind in his image, in the image of God he created them; male and female he created them” (Genesis 1:27). This is in the first part of the Genesis story; however, in the second part, there is a reference to Woman’s creation again. This time the woman is made from the man; this is agreed to be Eve’s creation. In Genesis 2:22, God removes Adam’s rib, “made into a woman and brought her to the man”. There is an apparent disagreement in the way that woman came to be. In one, she is man’s equal, and in the other, she is made from a piece of man and therefore belongs to the man. The Church leaders, all men, were then faced with the task of explaining this plothole in the Creation story. Their solution? Come up with a story about Adam’s first wife who had to disappear so that God would create him a new wife. This served two purposes: it explains why God made woman twice, but it also allowed them to educate women on their proper places by using Lilith’s fate as a cautionary tale. The same education is done with the end of Eve’s story. If their patriarchs do not properly dominate them, women become unruly temptresses that disrupt and destroy the social order. In her ancient origins, Lilith represents the aspects of the feminine that must be suppressed. Her innate sensual, sexual, passionate, mobile desires are dangerous to the patriarchy.

While Lilith’s story as Adam’s wife is arguably the most canonical version of her story, her relation to a patriarch is not her own story. Lilith has a history before and after Adam, which I find more interesting anyway. Scholar Barbara Black Koltuv says of Lilith’s origins that she “arose from the chaos” (1). She is an ancient force of counterbalance, an opposition to the maleness of the early world. One of the most cited origin sources comes from the Alphabet of Ben Sira. This is where the invention of her as Adam’s first wife is established. Kabbalistic myths of Lilith present her as the feminine aspect of God’s male-centric powers. In the Zohar, Kabbalistic work from the 13th century, Lilith emerges with Samael as God emerges with his female aspect Shekkina.

“...out of the dregs of the wine, there emerged an intertwined shoot which comprises both the male and female. They are red like the rose, and they spread out into several sides and paths…Just as in the side of Holiness, so in the Other (Evil) Side as well, male and female are contained in one another” (Zohar I 148a) 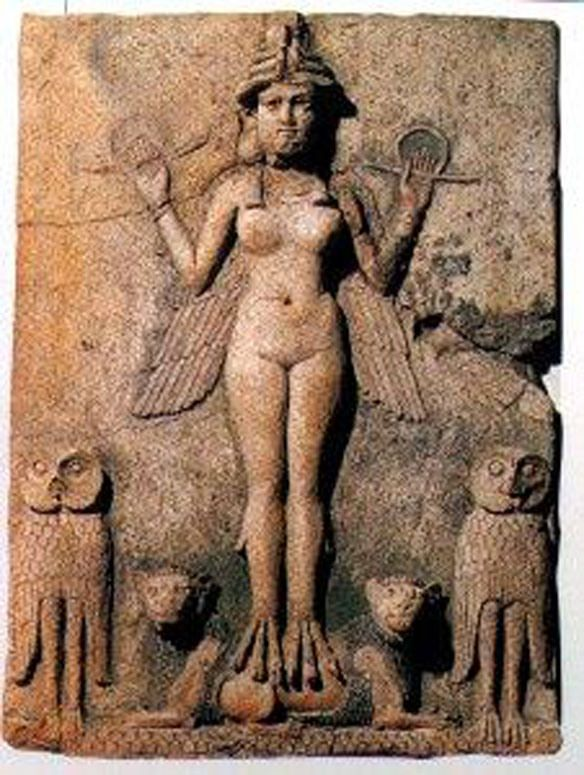 This Zohar passage continues to name some epithets for Lilith that I feel set up the ancient views of her: “Woman of Harlotry”, “end of All Flesh”, “Serpent”, and “End of Day”. Each of these names underscores her as an evil counterpart to the holy. There are even earlier mentions of Lilith-like figures from a Sumerian king-list dating back to 2400 B.C. where a she-demon called a Lilitu a vampiric succubus that could visit men at night and bear their ghostly children (Patai 295). These brief mentions are sprinkled throughout the ancient world with Lilith’s shape and character shifting each time. Although ancient texts are scarce, archeological digs have revealed much. From terracotta pieces that depict Lilith as a female form with owl feet to incantations of protection, Lilith’s power was keenly felt and feared. Raphael Patai describes a collection of bowls that were found in Nippur in Babylonia from an excavation conducted by the University of Pennsylvania. The bowls contain “Aramaic incantation texts” that date back to 600 A.D. (Patai 297). The magical text inscribed in these bowls was used to ward off Lilith(s). Rather than continue to belabor all the sources that include mere mentions of Lilith I will digress with this. Ancient sources depict Lilith as a deep well of dark power that was near impossible to understand, but patriarchy cannot have a powerful woman in the world without making her a source of fear, not admiration.

Barbara Black Koltuv’s book The Book of Lilith,  “...is an attempt to tell her story, to evoke her presence in consciousness, and to inquire into her meaning in the modern psyche” (Koltuv Introduction xii). Madness and gender oppression have a rich history with ancient origins that continue to plague us today. The adoption by Western Judeo-Christians of Lilith’s mythic origins and powers is one of the first instances of patriarchy creating a fallen woman and then condemning her for their own gain. Lilith’s story as the Biblical Adam’s first wife was made as a teaching moment of what will befall a woman who questions the status quo, who desires better for herself. For millennia Lilith has been left behind as a villain, a source of fear, and yet she has been recaptured by modern feminists as an icon. While I would agree that she is more than a villain. I would caution against worshipping her. She is a feeling, a moment, a glimpse of the power within all of us. She does not want to be feared, she is not evil, but she is not to be followed lightly. She wants to be seen, to no longer be boxed in--to be herself. Lilith is here to be called upon for the women who are ready to brave the work, forge their own path, and revel in their own power without even a thought to what anyone else is thinking of them. She is a villain. Yes because of what society has deemed acceptable for a woman they can control, but more so because as a villain she is free to be herself. Villainy has given Lilith her power for once they made her a villain, they feared the power they had given her. She was finally recognized as someone who could touch them back.