The Medieval Forum, run by graduate students from the Department of English at NYU hosted a Workshop, Lab and Exhibit on Friday, October 10th entitled "Manuscript Materiality," and I was fortunate enough to be able to attend. 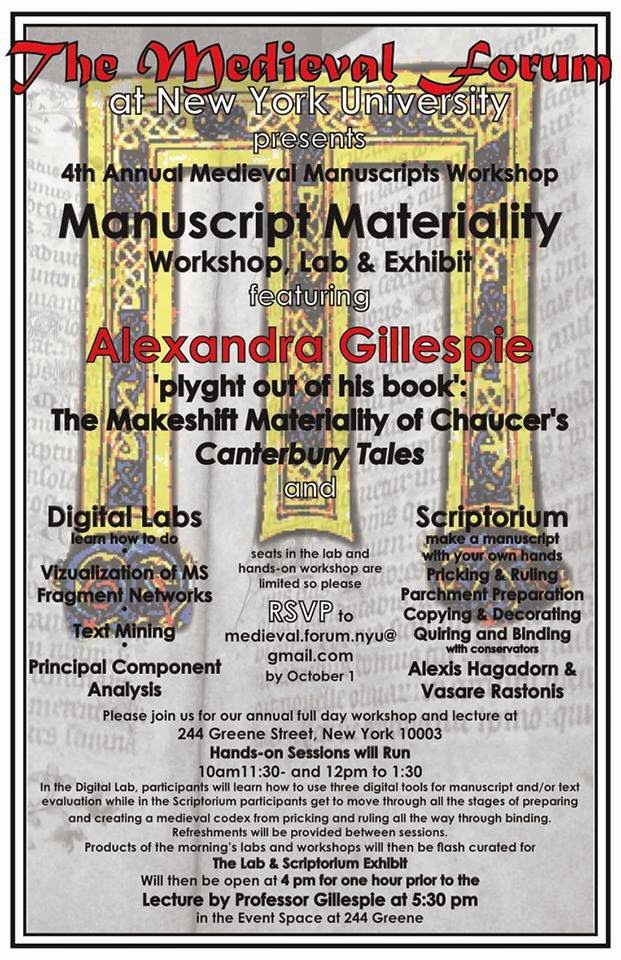 The Workshop consisted of Digital Labs that offered lightning workshops on visualization, text mining and principal component analysis in addition to aScriptorium that went through parchment preparation, copying and decorating, and quiring and binding. A very ambitious lineup that really shows the range of the Humanities!The Digital Labs featured Visualization of Manuscript Fragment Networks with Tara Mendola, a recent PhD graduate from NYU, who discussed her own research with manuscript miscellanies and worked us through Excel sheets for creating CSV files to use as raw data.The Text Mining component was lead by Collin Jennings and introduced us to R via RStudio for cleaning up texts to use later for mining.Aaron Plasek discussed Principal Component Analysis in a clear and succinct way as we attempted to clean up text from Chaucer to plot out word distribution.The Scriptorium included preparing parchment (supplied by Pergamena) by sanding and cutting it, then pricking and ruling the parchment so that it would be ready to be copied and decorated.We were supplied with quills and ink that mimicked the original materials used during the Middle Ages, and we were encouraged to copy whatever text we liked. Parchment was written on in a myriad of languages and ended up having interesting decorations in addition to marginalia. Working with a quill in hand on parchment ourselves revealed the time and skill necessary to create medieval books.Quiring and binding were also discussed by conservators from the Columbia University Libraries Conservation Program. This included a hands-on activity — each of us were able to practice both supported and unsupported bookbinding. I found it interesting that many physical books today still mimic old styles of bookbinding (such as the horizontal lines across spines that are a vestige of cord binding) just for show and not for the integrity of the book.For me, this kind of workshop really embodies all that the Humanities has to offer, as it encompassed both digital and analog technologies in order to explore the Middle Ages. The Digital Labs helped us to appreciate some of the fascinating work being done in the Digital Humanities, while the Scriptorium enabled us to better understand the physical work put into creating the manuscripts that we study.One of the coordinators, Angela Bennett Segler, mentioned that we no longer know how to get parchment as thin as they did in the Middle Ages, revealing how technologies are lost over time. While we are living in very technological age, not all advances that humans have made are still available to us, and it is important to keep this in mind.


But of course we are lucky to have all of these digital tools today, and I really loved participating in a Medieval Workshop with its own GitHub repository! I hope that more medievalists were encouraged by the workshop to add a digital component to their current and future work, making use of all the tools that humanists have at their fingertips.Check out photos from the lab, in addition to the Medieval Forum's Facebook page and Twitter feed.

Could we have a link to the GitHub repository? I am using Rstudio and also learning CA analysis for my thesis and I would love to learn more from the experts.

I think the repository did not move beyond cleaned-up text files due to time constraints, but I sent you a message with some code. Hopefully we will see more multi-modal workshops like this in the future!