In recent weeks, numerous blog sites, newspapers, and other online forums have been buzzing talking about Jay-Z and Beyonce’s daughter, Blue Ivy. These sites have commented on the name and its significance to the superstar couple, with many saying since their favorite number is “4” the name “Ivy” is a play off of the roman numeral.

The emphasis on “Blue Ivy” made me think about the significance of names in black culture.  I took it a step further and thought about black character names in the “100 Novels Project.” Immediately, Toni Morrison’s novels stood out so much that I drew identified four of her novels—The Bluest Eye, Sula, Song of Solomon, and Beloved and identified the top three most memorable character names from each novel. For Morrison, the names draw on distinct cultural and historical facets of African American life as they subtlety reveal character traits of the protagonist. 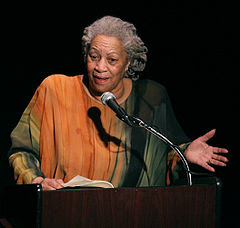 Pecola Breedlove: The protagonist of the novel—a poor, black girl who longs to have blue eyes.

Sula Peace: The protagonist of the story who is characterized by the birthmark over her eye.

Macon “Milkman” Dead III -  The protagonist of the novel, who grows up to be an egotistical man due to his sheltered and privileged upbringing.

Pilate Dead: Macon Jr.’s younger sister, unlike other characters in the novel, possibly because she is born without a navel.

Baby Suggs: Sethe’s mother-in-law and leading religious figure in the novel who is a source of emotional and spiritual inspiration for the city’s black residents.

Sethe: The protagonist of the novel who is extremely devoted to her children.

Beloved : Child of Sethe who returns from the dead to torment Sethe for killing/abandoning her.