The Evolution of Novel Covers

Since winning the 1988 Pulitzer Prize for Fiction, Toni Morrison’s Beloved (1987) has gone on to gain wide attention in both academic and pop culture circles. he 1998 movie adaptation of the novel starring Oprah Winfrey and Danny Glover has even influenced subsequent print editions, particularly, the design of the novel covers.

The publishers often used enticing images such as Hollywood actors and movie stills to market the book after the release of the film. Similar to Beloved, other novels turned into feature films were reprinted with book covers that signaled the movie tie-ins. 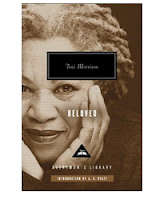