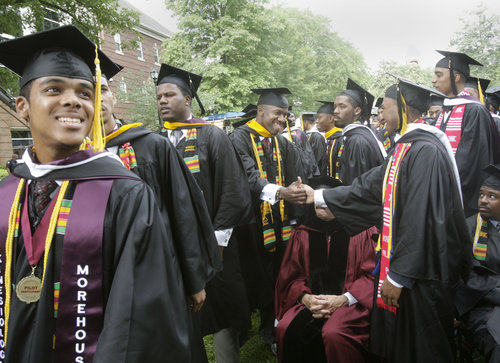 The “100 Novels Project” provides the opportunity for scholars to make divergent connections between a broad range of authors in order to reveal a number of similarities between their works and better understand how individual black writers have the ability to distinguish their own artistic voices and also contribute to a larger chorus of voices that constitute African American literary traditions.

As a graduate of Morehouse College, an all African American male college, I wanted to take the opportunity to survey a number of novels and focus more on the literary representations of black men and their educational pursuits across a 158-year time span of African American literature. Even though Frederick Douglass’s The Heroic Slave (1853) is considered a novella, his work sparked my interest to think more critically about the educational/intellectual character traits of primary and secondary male characters in novels—specifically, identifying connections between education and political activism.

After surveying a host of information on character traits, I selected Sutton E. Griggs’s Imperium in Imperio (1899), Toni Morrison’s Song of Solomon (1977), and Colson Whitehead’s Apex Hides the Hurt (2006) as a starting point as I continue to think about how writers have represented black men with apparent elevated intelligence. Here is a breakdown of the novels and characters I am considering so far:

Madison Washington(Heroic Slave) is the story’s protagonist and a fugitive slave who is highly versed in the U.S. constitution and leads a successful slave revolt.

Bernard Belgraveand Belton Piedmont (Imperium in Imperio) are the main characters of the novel and both are formally educated and serve as members of an all-black shadow government in Texas more powerful than the white-dominated Texas legislature.

Guitar Baines(Song of Solomon) is a secondary character who is a seemingly self-educated black male who serves as a member of the fictive radical political group known as “The Seven Days.”

Unnamed Narrator (Apex Hides the Hurt) is the novel’s protagonist; he is a formally educated male who serves as a “nomenclature consultant” called on to quell racial and political tensions by providing a new name of for a small town.

In these select works, education seemingly provides these men with access to social and political resources needed to combat oppressive political structures in their communities and American society as a whole. Or, having an elevated intellect simply serves as a means for the men to negotiate the world in different ways that many other black people. Education, though, is not always limited to formal classroom settings. While some characters do mention time spent in formal educational institutions such as the case with Grigg’s and Whithead’s novels, their works also imply that for these black men, more covert types of learning inform their social and political awareness.