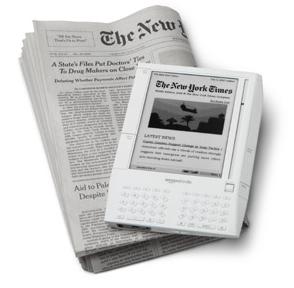 In her 13 Feb “The Medium” column in the New York Times Sunday Magazine, Virginia Heffernan takes on the issue of indie cafes in NYC banning or restricting the presence of e-readers, and iPads.  “[F]or the fancy tech-unfriendly cafes that shut out writers and readers like infidels…maybe they should just style themselves as restaurants…if you have to bus your own table, you’re in a café and you can read and write what you want,” she opines. Yet Heffernan didn’t touch on the inherent snobbishness behind the ban.  A ban on how or what one reads or uses to complete one’s work is against the very ethos of a café. (Full disclosure: Unless cafés start banning people who sit for 7 hours with the same glass of hot water – yes, I said hot water. It’s free. – I won’t be getting booted anytime soon. I work on old-fashioned pen + paper, no gidgety gadgets in sight.)

The aversion to e-readers and iPads reminds me a bit of when the Chicago Tribune changed the size of their newsstand edition a couple years back as a cost-saving measure.  Instead of the traditional broadsheet, the newsstand version became a tabloid, like the Chicago Suntimes.  Those of us receiving a delivered copy, however, received the broadsheet, as usual.  Almost immediately, there was palpable, if wholly unarticulated, tension.  People on buses, trains, and in cafes struggling with their broadsheets (You really do need some space to unfurl that baby.) were side-eyeing and sometimes verbalizing feelings of superiority over who received which paper, as if getting the paper delivered made one more erudite, more interested in culture and tradition, more unwilling to skimp on things most important – as if the text in the other, smaller, more metro-friendly paper was less intelligent, less informative.

I have a feeling that a ban on e-readers falls the same way.  For what harm does one reading a book electronically do to others?  You can still interact with the person holding it. You can still discuss the plot and characters if by awesome happenstance you’re reading the hardcover and they the electronic version.  What I really think is at play, here, is a desire to make a distinction between the kind of person who Reads and he or she who merely reads.  Between the person who spends hours and a large percentage of her last paycheck in an antiquarian bookstore to find a first edition copy of The Sword in the Stone and the person who is content to pay $10.99 for an electronic version at Amazon.com.

For my part, I wonder if the e-reader will become as ubiquitous as email, laptops, and cell phones, whereby one’s future coolness will be judged not through ownership of a device, but one’s active aversion to ownership.  In either outcome, however, the act of judging another’s personal preference as if there were a right or wrong way to consume artistic production, smacks of condescension, not to mention a misunderstanding of public art – which books are – and an engaged, informed public – which e-readers help create.  “[B]anning devices the size of books…is going too far and it’s anathema to the character and history of cafes,” Heffernan writes.

At the end of the day, banning certain forms of reading materials indicates a (baseless) value judgment on who one is and one’s commitment to artistic consumption – which should be anathema to anyone who enjoys the freedom of choice.