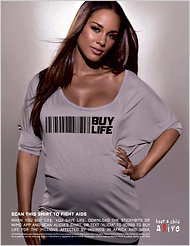 In the 28 Nov New York Times (I know this is late, y'all; this quarter kicked my butt, work-wise) an article ran about Alicia Keys' charity, Keep a Child Alive, and its newest venture to raise $1million in conjunction with World AIDS Day.  Keys convinced several celebrities of varying letter list popularity (A, B, and even C) to digitally die.  These stars, among them Jennifer Hudson, Justin Timberlake, Lady Gaga, and Elijah Wood, agreed to stop using Facebook and Twitter in an effort to raise cash, encouraging what Keys supporters called impulse giving (as opposed to impulse spending).  To date, $1.1 million has been raised.

Despite the obvious benefit using star power to help those in need, Im still struggling with the images used for the campaign.  To look at the advertisements, you would think they were raising money for a fashion event not needy children impacted by HIV/AIDS.  The stars are laid out in coffins, serenely posing with the words [Swizz Beatz] is DEAD, and underneath, [Alicia Keys] sacrificed [her] digital life to give real life to millions of others affected by HIV/AIDS in Africa and India.   This campaign makes digital death look attractive as opposed to when my digital heart stops beating (lets just say I dont look or sound like a lady in sweet repose when I have computer problems).

And yet, these images, as artful as they are (who knew Serena Williams had such beautiful cheekbones?), erase the faces of those in need.  We dont get to see those who need our donations; we see a fancy substitute, whose day-to-day life is infused with millions of dollars.

"The twist with [impulse giving] is that [the organization is] still couching it in retail terms winking at people in a way that makes them want to join in," writes Amy Wallace.  If the idea, as Wallace writes, is to capitalize on the increasing tendency to treat  stars like commodities, how big a deal is it that those in need are not integral to a visual appeal on their behalf, that they are eschewed for those who make the charity effort sexy or in Keys words rock star?

On the Buy Life website, one can buy shirts and donate money, but there are no images of the digitally dead interacting with those they are helping, giving the impression of a Hollywood project that never reaches beyond the studio lot.  Then there is the issue of the Buy Life t-shirts.  (For now, Ill avoid the creepiness of seeing a very pregnant Keys hawking a shirt with a barcode that says Buy Life.)

While I am sure the verbal stress is meant for the second word (e.g. Buy Life [not stuff]), we charitable consumers can just as easily be led to the idea that some lives are for sale, that $10 gives us rights to a share in another human being (and the implicit right to judge him or her for their failure to use that charitable donation to significantly improve their lives), as if we are investing seed money in a new venture.  That the money donated buys the lives of stars who are acting as stand-ins for the poor makes this point too easy to forget. 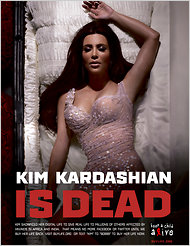 More familiar (traditional?) visual charity appeals often have small children living in squalor, looking at the camera - at us - with big, round eyes, imploring us to donate just 10 cents a day to help them lead happy, healthy lives.  What those traditional appeals cannot provide, that Keys campaign does, is emotional distance.

Keys campaign allows us to sidestep, temporarily, larger issues of overwhelming income disparity that cannot and has not been totally eradicated with our previous monetary gifts, while looking at something that is, in essence, visually insincere.  These celebrities arent dead or dying nor are they in desperate need of our $10.  By digitally resurrecting a celebrity depending on our donation as much as we depend on them for entertainment, we get to feel less guilty about our own inability to live without what may feel like a necessity but is just a perk of our own financial success and life in a wealthy country: personal computers, internet, smart phones, the luxury of freely expressing ourselves without (much) threat of retaliation.

Although I have no doubt the digital death campaign has done good in the world, in visually silencing those for whom charity is meant, consumers are allowed to avoid facing the realities of income disparity that persist and stagnate, globally.  In light of how much good that $1.1 million can do  - just $20 can feed 50 people in South Africa, the Buy Life website states - does the end justify the means?