On Monday, November 7, Professor Diana Sinton, the Director of Spatial Curriculum and Research at the University of Redlands, came to Georgetown University to speak about the way in which scholars and students in higher education can integrate mapping tools and GIS software within their research and class projects. Sinton described four approaches to designing mapping projects in higher education:

For learning and scholarship to be enhanced by these strategies, however, Sinton urged scholars to create a foundational set ofcritical research questions before choosing the mapping approach and software for their particular research projects.

i. Maps as organization templates: Is your research question a "what" or "where" question?

The use of maps as organizational templates is one of the most common approaches used by scholars. This method identifies where and what a particular phenomenon is by superimposing visual and quantifiable data over geographical templates, most commonly with GoogleMaps; this method is also known as a Google Mashup. 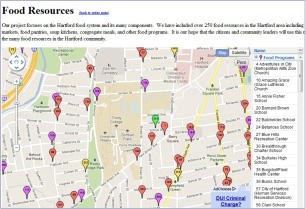 At Trinity College, a group of first year students in the course “Invisible Cities” used an organizational template approach to map food resources, historical sites, youth hangouts, and educational resources in the Hartford community using GoogleMaps markers. This approach let new students explore the city’s resources, as well as helping them understand the spatial layout of the city using a familiar platform.

Organizational templates can also be used for social justice and  humanitarian causes. For example, crisismappers.net provides open source mapping services to users interested in supporting “effective early warnings for rapid response to complex humanitarian emergencies” (Crisis Mappers Network). The Libya Crisis Map was launched in April 2011 by the Office for the Coordination of Humanitarian Affairs (OCHA). The map geo-locates reports on armed confrontations, attacks on protected persons, needs, and more. 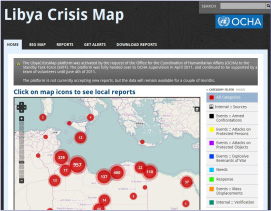 Organizational templates can also used for more advanced purposes, such as cultural and historical analysis. The University of Sydney’s history project,Digital Harlem, is a map that contains cultural and qualitative meta-data gathered from legal records, newspapers, and archives and historical maps between 1915-1930. The user can use the search tool on the side of the map to look for specific information about events (e.g. dance, baseball games, arrests, etc.), people, and places in Harlem. Professor Stephan Robertson, one of the creators of the project said, “I had a longstanding curiosity about doing something with online mapping, and since we were studying place, it seemed like an opportunity to see what was possible.” The project was formulated in the Department of History at the University of Sydney, and the Technical work was implemented by the Archaeological Computing Laboratory (ACL), at the University of Sydney. Sinton noted that it is essential to collaborate with a mapping specialist in order to help guide the technical side of the project. In all of these examples, Sinton highlighted that the organizational template is mainly used to identify the location of phenomena in the world using real world geographic data. The Digital Harlem mapping project gets closer to asking why objects are in a particular space, but the mapping approach for spatial analysis is a tool used to better answer this question. 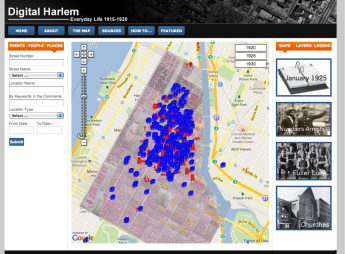 Digital Harlem Mapping Project, created at the University of Sydney

Spatial analysis considers the measured and descriptive characteristics of a map.  Professor Ann Knowles in the Geography department at Middlebury College, started a project called, “Visualizing Gettysburg.” Knowles started her mapping project with a question:  What would the confederate general Robert E. Lee actually see during the battle of Gettysburg? Knowles and her students created a view shed of General Lee’s position from a “point 75 feet above the terrain -- the distance from the ground to the cupola floor plus Lee’s eye-level standing in his boots.” 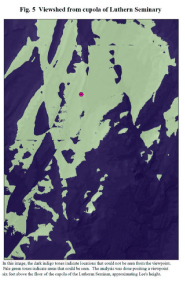 A Habitat for Humanity map, created by Professor Christine Drennon in the Urban studies department at Trinity University, explores and analyzes how the spatial layout of historical habitats, such a museums and national historic landmarks in San Antonio, impact the flow and structure of communities.

iii. Maps  as a metaphors for organization and navigation.

Maps as metaphors highlight the way in which humans have become naturalized to use the Google navigations tools (e.g. zoom, Google Street View) on a daily basis. Google navigation tools are now used in fractal visualization and online art gallery tours to help guide the viewer through non-geographic space. For example, Google is now powering an Art Project that explores museum space on the Internet (Figure 5). This project underscores how “pervasive” google tools have become in our everyday lives and how easily they can be used in teaching and learning practices. 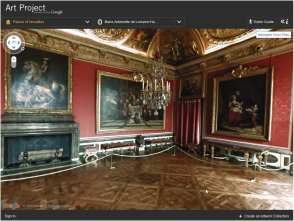 iv. Graphs and Charts that display geographic data but with no pretense of using “True” geographical space.

To exemplify this method, Sinton used the “Obesity Epidemic Graph” map. This map shows the lowest obesity rates to highest obesity rates in the United States using T-shirt symbols, rather than using the states geographic visualization with GoogleMaps. Graphs and charts are great ways for students and scholars to explore alternative visualizations of geographic data in an aesthetically pleasing interface. 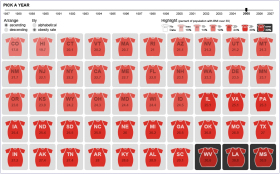 Historically, GIS tools have been used for capturing space, but as Sinton’s examples demonstrate, scholars can now explore new ways to add cultural data to spatial tools to capture the essence of place. In closing, Diana Sinton demonstrated useful teaching strategies in GIS, such as the power of side by side comparisons and the benefits of generating familiar frames of reference using maps. Sinton also urged her audience to think critically about mapping data.  As more and more mapping projects are launched, scholars need to question the accuracy and consider the source of the data. Lastly, there are many rationales for incorporating GIS into higher education, ranging from helping students compete in the marketplace to its useful and rich insights for teaching and learning practices, but it is important to establish a research question and a team of GIS specialists before a project can begin.  Many higher education institutions across the United States have created centers for spatial learning:

The Center for New Designs in Learning & Scholarship (CNDLS) was fortunate to have the opportunity to bring Sinton to speak. CNDLS staff members are currently gathering resources and working toward being able to support a wide range of GIS projects for teaching and research, in partnership with the Gelardin New Media Center.

For information about Spatial Literacy follow Professor Diana Sinton on Twitter and check out her blog, diana maps.

Thanks for sharing these rich examples about mapping, Kelsey. Maps also can be used to spatialize time and document change over time. They can also demonstrate nonlinear interaction among certain events or data.

Much as a map is a metaphor for organization and navigation, so too are clocks and calendars. I'd argue that one could add "when" to the "what" and "where" questions.

Did a discussion about mapping time or spatializing it come up? Do you (or anyone else) have any insights about this?

Elizabeth -- Thanks for the note! There was no mention of mapping time in the talk, but I have encountered scholarly work that has answered this question. Last year I was in a digital mapping class  called "Mapmaking as Art: Google Maps and Google Earth as Artistic tookls and Environments" at UCSB where my colleague used Google Earth and KML to create a timelapse of the geographic migrancy of people that ended on in the centerville pioneer cemetary. She described it as, "a visual examination of the far-flung origins of those who has a common desitination. Each of these folks is buried at the centerville pioneer cemetery in alameda county, calfornia."

You can open up the project using Google Earth. The course site also has other projects you can explore that deals with "time."

Elizabeth  -- you could also check out this mapping project called, "Memorias Postumas: A Noval and A Network in 5 minutes."  It maps the social relationships that develop over time in a narrative. The project was created by the Spatial History Project at Stanford University.

The impolications for this and analyzing literature are fascinating! Thanks for the post! Since I focus on narrative (including Memórias Póstumas de Brás Cubas) it seems like this could be a great tool. I'll be sure to follow how these initiatives continue to develop.

Very interesting and detailed post. Thanks for sharing. I think mapping has become so much richer, fun and more informative with augmented reality. There are ample examples on the internet but here is a TED talk on the topic that I found particularly interesting:

Birgit -- thanks for sending this TedTalk !

Thanks Kelsey for mentioning

Thanks Kelsey for mentioning those examples about mapping time. I like how Memórias Póstumas de Brás Cubas doesn't just map time, but also emotion and relationships. I'd love to see the places expand and contract according to their relative importance in the novel.

You are fortunate to be able to take a digital mapping course. If you're using those skills in a project now or plan to in the future, it would be great to hear about the project.