I have just started a Media Geographies graduate course, a course nested in and concerned with the "spatial turn" in the humanities and, more importantly, in Media and Cultural Studies. In fact, next to the incorporation of media other than film and the influence of continental philosophy (think Marx, Derrida, Deleuze, Foucault), the spatial turn may be one of the most important shifts (or turns) in the field of Media Studies. Abby Smith Rumsey describes this spatial turn as "as exploration of space and place in time, supported by technologies that represent spatial and temporal dimensions and permit scholars to discover, analyze, represent, and argue various interpretations of spatial date." In other words, the spatial turn in media studies opens up a whole new landscape - so to speak - for media scholars to explore film, television, music, video games, and so on. Additionally, this awakened spatialism allows for a rediscovery of scholarship never before recognized for its spatial analysis. Theories and models from other disciplines, namely geographers, suddenly become important and again allow us to reexamine mediums in new and valuable ways.

For example, David J. Bodenhamer attempts to delineate the use of Global Information Systems (GIS) and mapping for the humanities; while many humanities scholars have eschewed this technology because of its emphasis on concrete, linear, static, and empirical data rather than on more ambiguous, dynamic, and uncertain material (things us humanities scholars adore), we have to realize the value of incorporating space into our research. When we're trying to get from one place to another or understand the gradation of a given terrain, GIS maps are extremely useful. But when we're trying to understand the experience of moving to an unknown city for a potential job or the meaning of a specific spot on a wooded mountain, a map, regardless of how detailed, has less to offer. Yet there are still ways of incorporating space and the mapping of space into humanities research.

In fact, Bodenhamer continues, "A deep map of heritage and culture, centered on memory and place, ideally would work in a similar fashion. Each artifact - a letter, memoir, photograph, painting, oral account, video, and so forth - would constitute a separate record anchored in time and space, thus allowing us to keep them in relationship, and each layer would contain the unique view over time - the dynamic memory - of an individual or a social unit. The layers could incorporate active and passive culture artifacts, such as memories generated by intentional recall as well as memories left to us in some fixed or material form." Even in this slightly abstract example, Bodenhamer begins to theorize what a "map" fashioned to the tastes of humanities scholars might look like. While reading this, I too started to think of what this kind of mapping would look like. How would one begin to map, to capture and archive, human experience, memories, personal moments - the intangible minutiae of lived experience, emotion, tied to geography and place? Being a scholar invested in digital geographies, in the virtual (and also corporeal) space of video games, I immediately imagined a digital space constructed to resemble its offline, real-world counterparts, inhabited by - for lack of a better term - digital ghosts, digital memories, digital echoes, so to speak. In short, I wondered if a project might be able to act as a sort of virtual archive or library for human experience.

The way it would work on a small scale: Pick a high-traffic, public place, a park for example. Advertise that you're looking to collect personal stories, anecdotes, and memories (ideally emotionally charged ones) people may have associated with the park. Then, design the environment and allow users (players?) to inhabit this environment. Depending on the time and the date, the user would be witness to a corresponding memory. For instance, if the memory is from May 14 at 2:30pm and if the user is using the Echoes Project on an anniversary of this temporal-spatial memory, she or he will be able to relive this memory digitally through a combination of NPC (non-player characters) acting out the memory, audio of the subject actually telling their story (this would be done via video-captured confessionals), and manipulation of the lighting and topography of the environment to highlight atmosphere and establish appropriate mood. Here's a rudimentary example of what I have in mind. 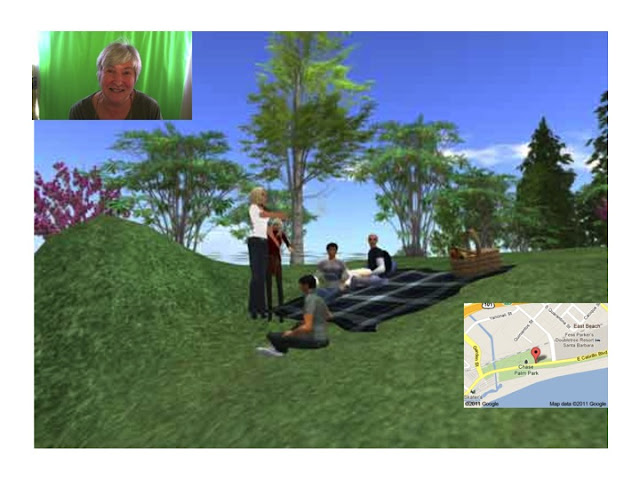 Ideally, instead of a small video-chat window, I'd like to incorporate the individual's confessional image into the scenery, as in mapping it onto the sky. This is best exemplified in the recent synesthesia game Child of Eden. In the below clip you can see the way the game's central character, Lumi, is mapped onto the flower petals (skip to 1:55):

You can view this video here.

A cohort of mine mentioned geocaching - treasure-hunting communities that operate via GPS - as another possible way of potentially theorizing a map of human experience. I like this suggestion because of the way it involves real-world locations and actually traveling to these spaces; unfortunately, it does not solve the problem of actually "mapping" the pregnant moment and the fussy memory - fussy because of its inability to recapture the moment - that archives the moment for the human brain.

While the "spatial turn" in the humanities does not have this conundrum as its sole question - there is also the problem of speculating spatial approaches to the studying of media (see Couldry and McCarthy's MediaSpace and the 5 levels of MediaSpace - I believe it is an interesting problem to mull over.