A Recap of Alan Liu's Talk, "Against the Cultural Singularity: Toward a Critical Digital Humanities"

In 2009, participants from the Day of DH began to compile definitions of the "digital humanities," working towards demystifying what goes under the purview of DH practitioners. After all, digital humanities often gets used to describe everything from research methods to pedagogical practices to the mere usage of a computer for accessing and conducting research ideas. The scope of digital humanities is obviously much narrower than what I've described here, but the point remains that the humanities still have much to do to clarify to a broader community what the work of digital humanities is and what it does both within and beyond the scholarly community. Jason Heppler collected and synthesized the definitions from the Day of DH, and posted them on What is Digital Humanities?, a website that, when refreshed, will show a different definition each time.

I mention “What is Digital Humanities?” to contextualize a talk that Professor Alan Liu of UC Santa Barbara gave at UC Davis on March 3rd, 2015. In his talk, "Against the Cultural Singularity: Toward a Critical Digital Humanities,” Liu both shared early drafts of chapters to his newest book and also asserted his goal with his new book: to develop a strategic intervention in the digital humanities and to consider how higher education and humanities intersect with society today.

This is a big goal to be sure, and one that calls for creating a robust theoretical and critical frame. Liu humbly recognized the size of his task, cautioning the audience that the presentation of his argument would resemble wading into increasingly deep bodies of water.

"As soon as I wave my arms around like this," Liu said and demonstrated, with a laugh. "That's when I need help."

I want to share some of Liu's initial insights here and then open up this blog post for discussion too. Articulating clear theories to drive DH initiatives are obviously crucial, and ultimately, what Liu's talk showed me was how much DH benefits from its confluence of interdisciplinary influences. Developing an adequate framework for DH necessarily and also involves maintaining that interdisciplinary focus and perhaps even considering more carefully how DH practitioners can partner with a variety of departments - both within and outside of the humanities - to meet its goals.

I'm going to divide my notes and reflections into two different parts. In the first part, I'll share the theoretical apparatus and context that Liu developed, and in the second part, I'll share some of Liu's vision for an effective, public digital humanities at the university. by the end, I'll offer some reflections, commentary, and lingering questions in the hopes of starting an even bigger conversation here at HASTAC!

First, you might be wondering what the "cultural singularity" is; this was a term that I was certainly not familiar with before Liu's talk. Liu defines the cultural singularity as a moment when all parts of a culture are able to be capitalized and brought under a corporate framework. Knowledge (including culture) become the stuff of information wealth. This vision renders (understandable) fear in the hearts of humanists, and in fact, some resistance to DH has been motivated by the concern that digital humanities research would, in fact, facilitate a kind of cultural singularity.

Liu assures us that this is not the case and that DH has the potential to actually allow for greater engagement in social and cultural critique online. With examples like #transformDH, #dhpoco, GO::DH, 4humanities, FemTechNet, and, of course our very own HASTAC, models of this engagement already exist. Creating even more widespread models of organizations like these can make DH methods more visible and offer more opportunities for scholars to engage in conversations about digital cultures.

Yet the question still remains: what sort of critique is uniquely appropriate for DH? What critique allows the field to assist mainstream humanities critique? What kinds of arguments could be uniquely delivered through DH? These were Liu's central questions in beginning his project of developing a critical framework.

In other words (and in Liu's clarifying words), "institutions are motivated by the collective behaviors and taken-for-granted thinking of their organizational fields and environments."

Where Liu finds neoinstitutionalism useful is in its potential for tactical criticism in DH. Unlike media studies, DH aims to change teaching and research inside the academic institution; DH practitioners do not merely comment on what they see happening around them. Neoinstitutionalism, then, provides DH theorists and practitioners with a theory that combines social constructivism with adaptive structuration to create approaches to organizational technology that combines the best of the humanities with social scientific thinking: with the right framework, DH can look both in at the institution and out at society at large. What DH thinkers can offer is a skilled and thoughtful perspectives on the technologies that get used both within and outside of institutions and consider their implications.

A Vision for DH in the Academy

Liu described what he thought coudl be a successful implementation of DH into the academy, both in terms of particular roles that could be developed and in terms of making pre-existing roles and practices more visible.

One role that Liu imagined getting developed in the university is a service position he dubbed “the roving public humanist.” This person might be a Nobel prize winner; she might be an up-and-coming new hire. Either way, this person would get a course release each year to go out and engage publicly, whether that would be through writing blog posts, meeting community members in libraries or museums, or even developing and recording multimedia that informs the larger public about humanities work happening in the academy (Liu jokingly suggested the most boring reality show of all time: “the life of a living scholar!”).

Institutionalizing public humanities work and making it a prime responsibility for a faculty member shouldn’t be a provocative idea - but it is. Though some may argue that the kinds of responsibilities Liu outlines for the “roving public humanist” may be things that everyone should be doing, there is something valuable about rewarding faculty for this kind of engagement, whether it’s through a course release or a line item that can be counted as service on a CV.

Indeed, people already are acting as “roving public humanists,” but are not exactly getting visible institutional recognition for the work. Liu projected a chart he created of the kinds of ways in which humanities work engages with particular kinds of human-generated, machine-generated, and machine-assisted content to reach to to a larger public. 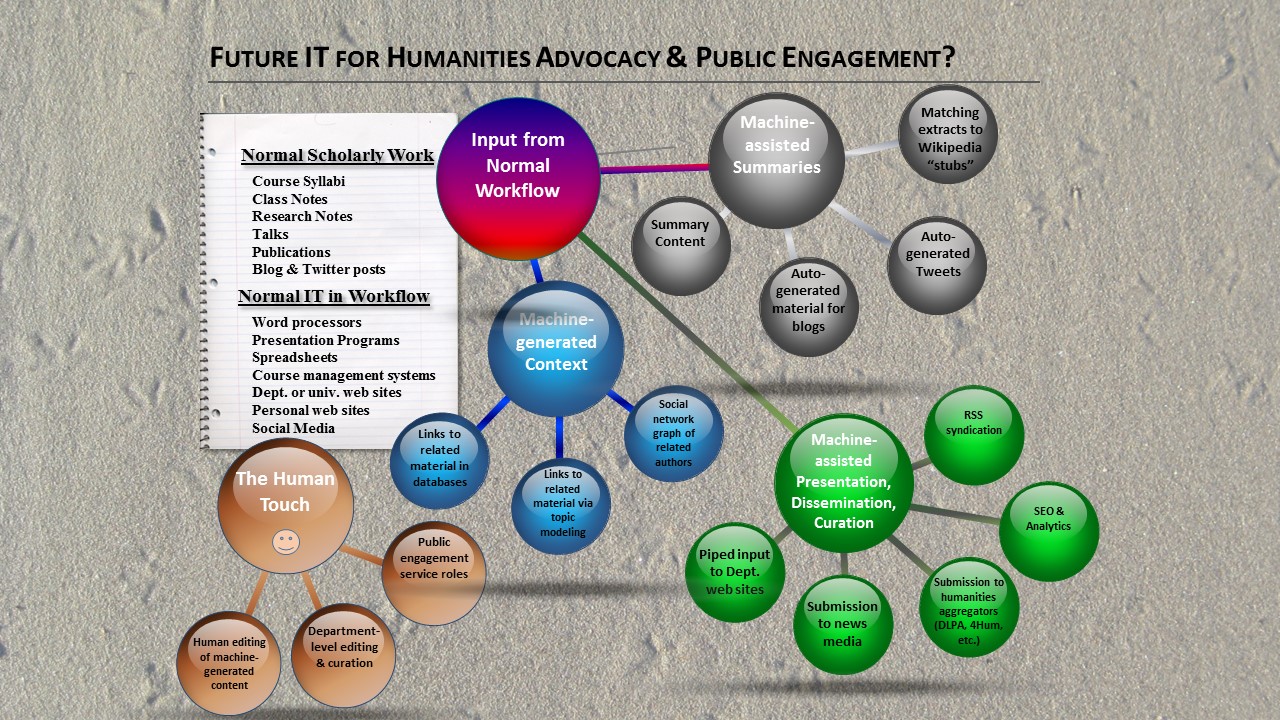 To consider how our daily work can be re-purposed, re-considered and re-discussed in a variety of contexts is also to think more about the relationships between what happens inside the academy and outside of it. Humanists notoriously could be better at making clear where they can be a part of valuable institutional conversations, and in this particular moment, when institutions look increasingly to privatized, technological systems to enhance university operations, it seems that humanists have an important role to play in the conversation. Our next step is to articulate what the role is, make legible our contributions, and offer some persuasive evidence for why those contributions matter. Indeed, hasn’t that been the work of the humanities all along?

Questions for the Community

So, HASTAC scholars and community members, what do you think? How does Liu’s plan for action sound to you?

What can we do - whether our roles are as graduate students, tenured professors, or community members - to make our work in the humanities legible?

Is DH the best approach for offering a public face to the humanities? Why or why not?