A semester on Collaborations

This semester my keyword was Collaboration. Anita Chan proposed a syllabus on Systems of Collaboration designed for researchers interested in studying collaboration networks as social, technical, and political formations, and the cultural conditions that allow them to emerge as such. I also took Norman Denzin’s class of Advance Interpretative Methods. This course focuses on writing as performance and encourages participants to explore autoethnography as a way to describe culture from our personal archives. We did not talk about collaboration, but indeed, we performed it as a group. And finally, Collaborations on Feminism and Technology, leaded by Sharon Irish. This course is part of the FemTech Net, an initiative from several feminist scholars who had created a virtual environment for cooperation, which values appears in the Femtech Manifesto published this year. As a collaboration with this collective, I want to share in this blog a narration of my progress through these courses because Femtech helped me to create connections and links with other persons and contents. After I reflect on my learning process, I realized how I was involved in a bigger project, which allow me to focus on a reflection on technology. My thinking derived in different pieces, like a performance, a paper, a conference panel proposal and a collaborative draft for a workshop for children. For that reason, I will explore the way of how these collaborations shaped my participation.

Classroom experiences were connected to the awareness of different political issues. As our professor Sharon Irish said. "Every day there have been horrible and tragic events unfolding around the globe, but this semester seemed especially to foster despair. Even before the term began, the University of Illinois Chancellor, Phyllis Wise, reneged on the hiring of Professor Steven Salaita." These discussions were also fundamental to understand these spaces as possibilities of dissension, and especially to bring society back into the classroom. As an international student, this was a practical learning of University politics.
In fact, something that I appreciated in a course devoted to technology was that we entered into the technology discussion through the lens of the politics of the university, especially considering diversity. As my classmate Ga Young Chung expressed later, it was important to know that we can discuss technology from an entry point different than coding 101. In fact, the path through Collaborations in Feminist and Technology brought us into issues of labor, bodies, sexualities, race, transformation, place and systems. We had the opportunity to hear multiple voices and to include them in our discussions. We also intervene the Wikipedia. I project my intervention into the Spanish Wikipedia, where I wrote an entry for f Brigitte LG Baptiste, a transgender biologist in Colombia. As a part of the interaction with the community, I learned of the process of classification, because gender distinction in spanish grammar allows you to use the word scientist in different ways according to gender concordance. Cientifico or Cientifica could be use for a precise way of describing. However, as a category, in the Spanish Wikipedia, this distinction does not operate. As I classified as a Transgender female scientist, (Cientifica Transgenero), the community did not allow me to create that category. I normalized the entry then to “Cientificos Transgenero” to classify Brigitte in this group. 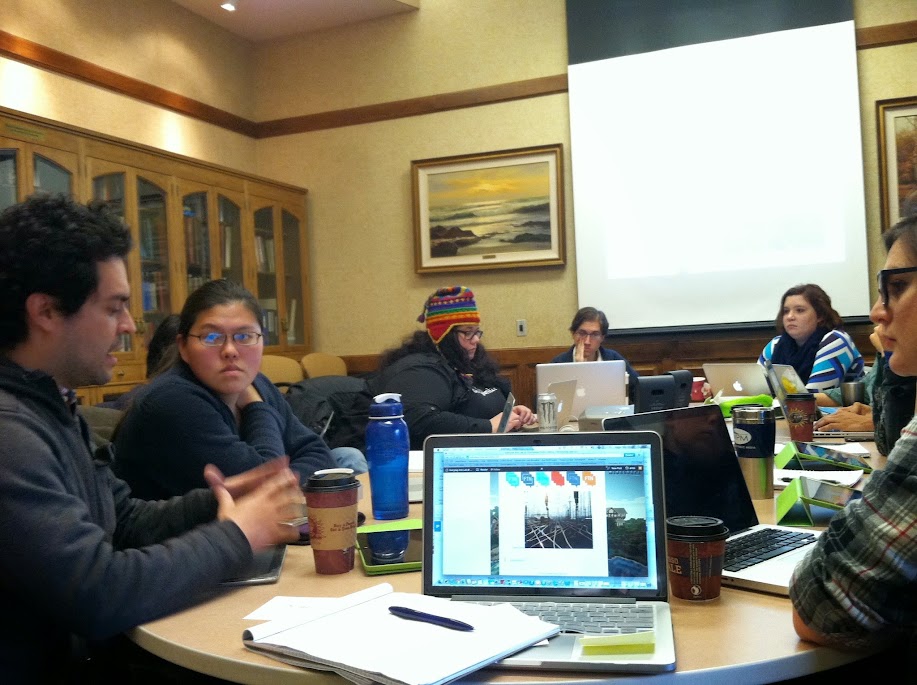 Meanwhile, the systems of collaboration class, developed as a space for reflecting through an intensive labor of blog posting each week. We finally posted more than 94 posts, based on several readings that move us from technical histories of technologies to postcolonial scenarios of technology production. Anita’s network of colleagues and friends also give the opportunity to extend our discussions. She brought activist and artist from Colombia, faculty that works on technology at our university, and activists that manage science and technology labs in the US. As a result, we should develop a collaborative syllabus.
That was an excellent opportunity to connect Feminist and Technology with Systems of Collaboration. Along the semester, I had a chance to meet Ann Wu, a 2nd year student from Art Education, who was conducting a video games workshop at the Champaign Public Library.Her work focused on a critical approach to games, which involve reflective practices for kids who went to the library to play Minecraft. I ask her if she wanted to participate in putting together a proposal for a Hastac 2015 panel on technology and education. I told her about my previous experience as a volunteer for the OLPC free software and my research on teaching and technology deployments in latin America. We started to meet each week, and we began to shape a joint workshop that included some of our theoretical explorations of technology and culture. We finished a proposal called Technology and Us, a syllabus document the theoretical foundation and curriculum design of the Technology and Us workshop series. Although our workshop is not a translation of the FemTech syllabus, it is informed by questions of collaboration, solidarity, spatiality and pedagogy that we experience as members of the FemTech collective.
The link between FemTech and Advance Interpretative methods was also shaped during the semester. Throughout the semester, we write our performance pieces for sharing with all the course. Our performance ranged from experiences of field work, historical narrations of migration and episode of loss because the key element was to translate our experiences into broader descriptions of cultural struggle. During the process, we perform different theoretical readings and plays, by adapting them to performed speech. Parallelly, we wrote our final piece in three revisions. In my case, I started with a description of my childhood and my interaction with video technoculture. As we discussed in the Femtech class on performativity and everyday uses of technologies, I decided to focus my autoethnography on my interactions with Video Cassette Recorders in the eighties. I wrote a second piece by mixing VCR manuals, my writing and pieces of newspaper that describe the impact of video culture in my country. Finally, I decided to assemble a video, with images that I was describing in the second version, but also highlighting my practices as an audience. The video has english subtitles that translated what I was saying to the audience during my performance. I considered that this making process was necessary for shaping my understanding of a broader project on genealogies of digital culture in Colombia. I could develop a very personal archive, but connected to a discussion about memory and preservation in all of my classes. I could locate it historically and geographically on a map, something that allow me to participate into the Situated Knowledge map from the FemTech Network.

As my physical participation in the FemTech course is almost finish, I believe that the practical learnings I had by inhabiting my university has also been part of my involvement in these courses. For the FemTech course, I had the opportunity to be part of the Long Table Etiquette installation for the Digital Labor Conference at the New School in New York. As TL Cowan, Veronica Paredes and  Jasmine Rault spoke about what they understood under discussion of digital labor, I felt happy to hear about other possible education, technologies, and spaces. Although, I regret not to take part of the table as a guest, I’m writing now to extend that invitation, when the semester is ending.
106