This is the first in a series of four blog posts centered on the topic of selfies in contemporary culture. The series was commissioned by HĀSTAC Scholars Director Fiona Barnett for her course Click Here to Continue: Bodies, Identities and Practices in a Digital Age, offered by the Department of Modern Culture and Media at Brown University, Spring 2014.

In November of 2013, Oxford English Dictionary elected “selfie” its word of the year. According to Oxford Dictionaries’ own research, the word’s frequency rose 17,000% since November 2012. The decision, however surprising, solidified the selfie as a pillar of global contemporary culture, legitimizing the phenomenon and proving its omnipresence; while previous understandings of selfie-taking were often couched as an activity for pre-teens and young girls, Oxford Dictionary shows us how this conception no longer holds up. It is time for selfies to be recognized as a much broader cultural practice. We are all taking them. We are all posting them. 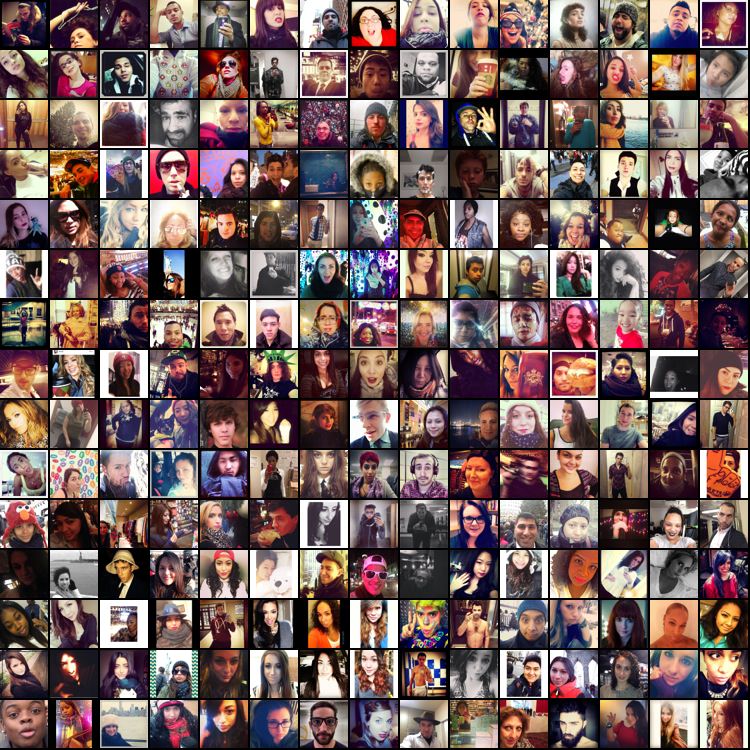 Today's selfie is not a singular practice; it has evolved over time, at breakneck speed through the beginning of this decade, maturing into its very own genre. Art critic Jerry Saltz supplies a framework for this argument, explaining how “a genre possesses its own formal logic, with tropes and structural wisdom”. Formally, selfies are taken within an arm’s reach or in a mirror, usually include the extended arm in the shot, and are cropped around the subject’s face and upper body. As Saltz points out, “Bad camera angles predominate, as the subject is nearly always off-center.” As for tropes, there’s no shortage of examples. While the #SelfieOlympics illustrate the oftentimes silly and playful nature of these tropes, the cringeworthy Selfies with Homeless People paints an unforgiving, crass picture of selfie-takers. And as for “structural wisdom,” one might look to Kim Kardashian or the Victoria’s Secret Models’ instructional videos on selfie taking (below). Understanding the selfie as its own genre separates it from other forms of photography—and other forms of self-portraiture in particular—delineating a new, separate semiotic system specific to this new phenomenon.

The contemporary selfie is the new default for amateur photography. Although self-portraiture permeates art history across a variety of media, the contemporary selfie is truly a product of the amatueur. The point-and-shoot camera is its preferred vehicle, the digital image its primary medium, social media its main venue. This is what sets the selfie apart from previous forms of self portraiture: it’s dispersed, participatory, self-regulated, and accessible.

To me, selfies are interesting because they provide the most succinct example of how new technologies, namely social media and smartphones, have altered cultural production and personal expression. Social media demands that we share every possible moment of our lives, that we expose ourselves to friends and strangers by publishing endless streams of content. These structures, dubbed “timelines” and “profiles,” advocate a sort of curatorship, or at least that is their effect; users closely supervise their content, carefully constructing their digital identities post by post. Selfies lend themselves well to this paradigm. As James Franco puts it, they are just “tools of communication…Mini-Me’s that we send out to give others a sense of who we are.”  They offer the social media user a new and greater form of control, a mode of content production in which the subject determines their own portrayal without mediation or resistance. The advent of flip-monitors on digital cameras and the front-facing camera in smartphones speaks to this desire of selfie-takers/social media users to control their self-representation more closely. When the camera display faces the same direction as the lens, there’s no guesswork. Viewing themselves as they take the photo, the subject-come-photographer is at once able to compose the image and their body, making whatever adjustments in real-time based on the visual feedback provided by the display. This transcendent management of composition is also what fuels the logic of mirror-shots, and is why selfies are used by so many celebrities as the ultimate public relations tool. The self in the selfie will always be posed.

Selfies are casual, fun, even addicting. But they are also important. They are a global movement, documenting the lives of world leaders, celebrities, and ordinary people alike. Selfies are universal a mode of communication. They are produced most often for the purpose of sharing over a network. These ordinary content-objects are ubiquitous and have changed the way we photograph ourselves and the ways in which we construct our own images. They provide an example of how culture, on a global scale, is influenced by the digital age. They are the things we say about ourselves to ourselves while other people are listening. Welcome to the selfie’s 15 minutes.

I would agree with this. Selfies, a new word, but its meaning is a new cultural difference. Everyone is involved and doing it, from wide range of ages. As seen above people have their own way of taking a seflie, its not just your typicial face shot, its all about the lighting and the angle too. Theres steps into taking this selfie to make it complete. Although these steps aren't standard, everyone takes different steps into making themselves look great.  As it says on Feminispire, http://feminspire.com/the-evolution-of-selfie-culture-self-expression-na...  selfies can be portrayed as harmless or disturbing.  Celebrities have taken it to themselves and people can view them as a regular person.  Or if you're Kim Kardashian, you can be given the name "The Queen of Selfies"  I think that selfies can go either way as in the harmless or disturbing route.

Selfies have grown to be way people take pictures now a days, they like the fact that they can take the pictures themselves instead of havung to ask someone to take the picture for them.  it brings a whole new dynamic to taking pictures.  it is good for people to enjoy this new movement.