The Political Economy of Knowledge

This post is reproduced from my personal blog, which you can view here.

This is a post using basic graphes and charts to tell a story about the racial and gender make-up of the knowledge industry at the University of Florida. Basically, I want to look at the university as a factory, one that produces knowledge. As a labourer in this industry, who controls the means of production is of profound interest and direct import to my daily life. Of course, our knowledge factory is part of a larger knowledge industry called academia. It produces usable things (e.g., data, professionals) that are valued in the market economy of the modern, neoliberal world.

However, this metaphor becomes slippery when we think about things like the means of production and who controls them. There are two broad groups managing resources within most universities; the administration and the faculty. Do you think the racial and gender make-up of the academia's managerial class matters to what kind of knowledge is produced and valued? I do... 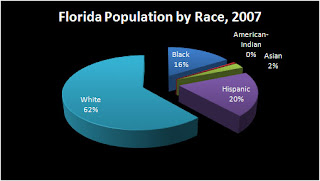 So, let's start at the beginning, with the undergraduates. The race and gender percentages of this group are often examined as a way to 'measure' the fairness of an institution. In other words, do minorities and women have roughly equal access to higher education? 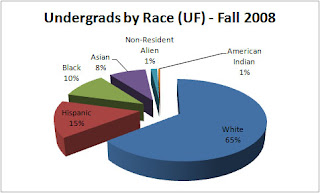 In terms of race, UF is more or less on par with the state's general population. Minority groups have slightly lower numbers enrolled at UF then in the general population; but, of course, UF is a historically white university (HWC). So, this is not too surprising. 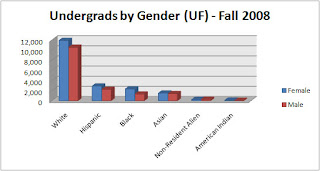 UF actually seems to be doing pretty well in its admission of female students. The female undergraduates outnumber their male counterparts in each racial group.

The next set of figures I want to look at are the number of graduate students at UF along thesee identity lines. The graduate students make up the next generation of knowledge industry managers. We will earn PhD's and eventually/hopefully receive jobs as faculty. Also, many of us will take administrative jobs at some point in our career.

So, how do the numbers at UF stack up for the grads? 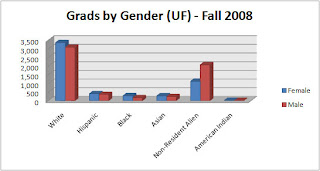 Again, in terms of gender UF seems to be privileging their female students by admitting more of them. There is one major difference though, the number of female student within the non-resident grads is significantly lower. Hmmm.... 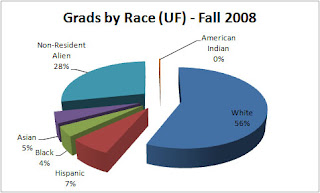 In terms of race, US minority percentages experience a significant dip, as do White Americans. Why's this? It's the large number of foreign students, many of whom work in the tech and 'hard' science fields. In fact, since I spend a significant amount of my time at UF in the Computer Sciences Building, I come face-to-face with numerous tech workers from abroad, and few of them are female (see "Grads by Gender" chart above). I wonder, what is the role of these students in their departments and respective fields? Are they becoming part of the next generation of knowledge industry leaders? Does it matter if they do so in America or in their country of origin? Does the training of foreign students by US institutions contribute to a kind of (neo)Colonization of the Mind?

Where are the foreign students coming from? 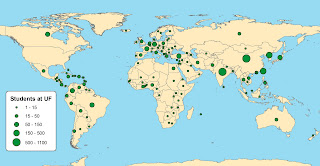 I think this is great! As an anthropologist I love the opportunity to meet and exchange ideas with students from around the world.

However, I wonder what number of female and minority students gain entry to the knowledge industry as full-time producers (e.g., tenured faculty, tenure-track faculty). 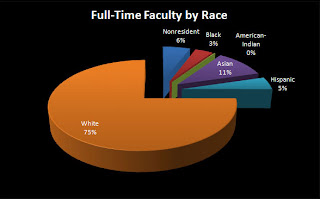 Apparently, at least at UF, that number is relatively low. As you can see, by the time we 'rise' to the level of full-time faculty we see a return to a White dominated institution. [Full-Time Faculty refer to tenure-track and tenured faculty]

This raises an immediate pedagogical issue for me. How does the university speak to its non-White, and non-Male students, colleagues, and larger community? Hopefully, at least there are more female voices at UF; something demonstrating that all the female graduate students have an equal hope of landing that increasingly rare tenure-track position. Is this true at UF? 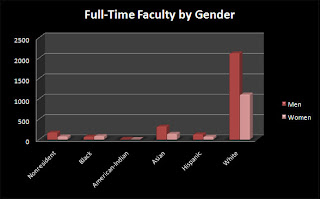 What about the administration? What's the gender and race make-up here at UF? The image below show the race and gender numbers for Administrative, Support/Service, Secretarial, Skilled Crafts, and Maintenance workers here at UF. Look closely, you'll see some disturbing trends. As you look at the graphic, ask yourself, why are certain jobs dominated by certain races and genders? 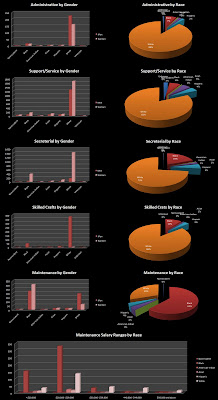 So, what does it all mean? Well, the University of Florida is what Eduardo Bonilla-Silva describes as a Historically White University (HWC), drawing on the term Historically Black College (HBC) as a way to demonstrate that racial grammars infect our daily interactions. Also, don't think this is unique to schools in the Deep South. Ivy League schools, you're probably a-lot worse.

The good news? If you're a white guy, the academy is still hiring! If you're not, you can always get married to a white guy or go home. Ultimately, this is all about privelege and who gets to keep it (see McIntosh - Unpacking the Invisible Knapsack).

So, how do we change it? Well, the first step is to realize that it is changing. However, if you're like me, the current rate of change is ruthlessly slow. The insulation of privilege continues to halt significant changes. I think this will be exacerbated with the current economic 'crises'.

Many Critical Race Theorists (which I draw on heavily for this post and my own research) talk about the reproduction of hierarchy in the education system. The first step they and others suggest in combating these inequalities is to name them. This post is a first step in naming them.

Why post this on HASTAC? I didn't for a while. However, in the digital age our access to information is remarkable. I invite others who might happen upon this post to do the same for their institutions. The charts created for this post are drawn from the information compiled by the University of Florida's Office of Institutional Planning and Research. I bet your university has a similar department, and I also bet it'll be difficult to find its data. However, every public university has to make this information available in one form or another.

Its up to us to find this information, analyze it, translate it, and use it to name the inequality around us. I don't know about you, but I want to live in a world where I'm surrounded by minority and female voice at least as much as White Male ones. Help me make that dream a reality!

If you're interested about visualizing information about the knowledge economy, you might be interested in what the Counter-Cartographies Collective has done here at UNC. Particularly, this map. The .pdf is cool, but you can tell they really did a stunning job when you see the paper version!

Mike, its great that you mention the 3C's group, the map you reference was part of my inspiration for this post (particularly the map of international students). In fact, I've got a small group of fellow grads and undergrads here at UFL intersted in creating a similar disinformation guide for our campus. I've even got the GIS information from our planning department and am using it for the basemap. Are you a member of 3C? If so, I'd love to strike up a more in-depth conversation. heck, I'd like to even if your not :-)

thanks for the reponse!
-Ed

No, I'm not a member of the 3Cs, just a secret admirer. They're so mysterious! But I'm trying to get them to pitch in on a zine I'm doing called "radicaLISm: radical library and information science thought".  They seem to be open to collaboration. From their website: "Contact us for further information on possibilities for collaboration at countercartographies (at) unc (dot) edu." http://www.countercartographies.org/

right on the spot

Ed - This is a great post and I'm glad you decided to post it on HASTAC!. As a grad student of color in a predominantly white private university, I see the pretty uneven breakdown of student demographics in terms of color and/or gender.

You bring up some great points, including how the hard sciences break down in terms of skewing toward non-native American students, and issues of knowledge production and exclusion/inclusion. For my part, I think of lot of the issues rests with academics who think their work automatically includes alternate viewpoints without thinking of the ways it may be lacking, or pushing harder to see if they can be more inclusive/specific in that research.

We had an incident of blackface on campus recently, and the response by the students was telling: someone asked me why people didn't lighten up, instead of asking why would people perpetuate a practice that makes others uncomfortable? To me, this signals that professors across disciplines need to do more with working collaboratively to expose issues of prejudice within their own fields.  Lynching, for example, affects blacks and as Gonzales-Day points out in Lynching in the West, has had a huge impact on Mexican and Asians living in California during the "Wild West" period.  This topics involves economics, history, politics, law, ethnic studies, rhetoric and even visual studies.

I was just speaking to my advisor about issues like this when she told me, "It's helpful to view what we do in terms of incremental change." It seems, that if we can get more people across the board working to integrate their lessons with one another, that change may still be incremental, but it could also pack a bigger punch.

This is such important work.   Thank you very much for reposting,  Edward.   I think there are plans for a HASTAC Scholars Forum on some of these key issues, especially race.   The "Historically White University," as my colleague says, is still very much with us.  Thank you for these figures and for your important research.

Who owns the university?

Thanks for your post, Edward. We've been talking a great deal about higher education and the mission of land-grant institutions here at the University of Illinois, Urbana-Champaign this week, as graduate student employees went on strike to protect our tuition waivers, which the administration was unwilling to guarantee in our contract. They agreed to our language yesterday in a bargaining session, and we were back to teaching today. The University of California system is holding a walkout and a strike this week to protest the Board of Regents' vote on a 32% increase to student fees and the removal of tuition waivers for some graduate students. The Board voted today to approve these increases. As state funding continues to drop for public universities, what will become of higher education when only those privileged enough to afford it can attend?  What happens to those land grant missions? Graduate student and fellow HASTAC scholar Michael Verderame raised these questions with the Board of Trustees of the University of Illinois last week. This topic was also the the subject of Democracy Now yesterday.  This same Board of Trustees meeting featured a presentation showing the number of underrepresented students on the three University of Illinois campuses to be around 13%, a number that has fallen in recent years, and has always been embarrassingly low. While the "Historically White University" has always been a problem, it is one that seems to be getting worse.