“On Evolving and Emerging Literary Forms: A Curatorial Statement for ‘Electronic Literature & Its Emerging Forms’” 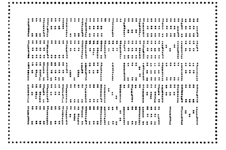 The title of this exhibit of electronic literature at the Library of Congress could very well have been “Literary Experimentation from Print to Electronic” or “The Human Impulse toward Literary Expression,” or even “The Evolution of Literary Form,” for they all capture particular nuances that we convey with this show.  But “Electronic Literature & Its Emerging Forms,” the title we have chosen, makes it clear that the exhibit focuses on the specific literary form of electronic literature and the way artists have experimented over time with it.  The design of the exhibit lays bare this notion:  On the one hand, the Library of Congress’s Whittall Pavilion is arranged so that the five Electronic Literature Stations are located in the prime location, i.e. the center of the room, underscoring electronic literature’s prominence as both concept and artifact; on the other, the display of print works comprising the five Context Stations showing connections to and contextualizing the experiments of artists creating for the electronic medium is organized to its left, hinting to chronology and antecedents of form.  Creation Stations on the right hand side of the space suggest opportunities for visitors to engage actively with creating literary art.

As such, the exhibit builds on scholarship by Eduardo Kac and C. T. Funkhouser to make the argument––one expressed experientially rather than in written form––that electronic literature is a natural outgrowth of literary experimentation and human expression with roots in print literary forms and, so, constitutes an organic form generating from the dynamic human spirit that is evolving, will continue to evolve through time and medium.  No matter the medium––orality, writing, print, electronic, mobile––give an artist something, anything, to create with––air, animal skin, paper, computer screen––and she or he will find a way to use it for making art.  This impulse is, after all, a feature of our humanity. 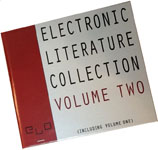 But what is electronic literature?, you may ask. It is generally defined as a “digital born” literary work––that is, “a first generation digital object created on a computer and (usually) meant to be read on a computer” (Hayles 3).  In a world dominated today by smart phones and tablets, the term computer has come to include also a computing device.

Electronic literature was not digital born yesterday but rather has been in existence for over five decades, starting with Théo Lutz’s 1959 computer generated poem, entitled “Stochastische Texte” (Kac 273; Funkhouser xix), and has been available commercially since the early 1990s with works published by Eastgate Systems.  Its history has been inextricably linked to and enriched by experimentation generating from various art forms including literature, the visual arts, sonic art, performance, and cinema, and it is influenced by code and platforms associated with computer science.  Thus, electronic literature is a hybrid art form that requires its readers to utilize various sensory modalities, such as sight, sound, touch, movement, when experiencing it.  Just as one does not expect music to play when opening a book, one does come to expect it, for example, in web-based work like Erik Loyer’s “Strange Rain” or Thom Swiss’s “Shy Boy,” both found in this exhibit.

Within electronic literature one finds many genres––some of them reflected in this exhibit, like hypertext poetry, hypertext fiction, interactive fiction, kinetic poetry, generative text, interactive drama, to name a few.  Key to understanding electronic literature is the construction of the genre’s name––that is, a mechanic feature complementing a traditional literary genre, i.e. hypertext and poetry, kinetic and poetry, interactive and drama.  Function and form are rendered obvious in a way that we do not notice in print.  So accustomed we have become to the technology of the book and writing that we no longer think of them as technology––but they are.

Despite being actually middle age, electronic literature is still relatively young in the eyes of the general public (and in comparison to print).  However, recent articles and posts in Salon.com (“After e-literature, there’s no going back”) and The Huffington Post (i.e. “New Wor(l)d Order: E-lit Plays With Language”) and readings at The Kitchen in NYC in 2012 and 2013, along with its mainstreaming with traditional literature at the Modern Language Association and Association of Writers and Writing Programs go far in raising awareness of electronic literature.  Likewise, the growth of the Digital Humanities, with its focus on new approaches to research and teaching, has helped to foster interest in it.  In fact, this exhibit exists because of the intervention of digital humanist scholars, particularly Research Assistant Professor and THATCamp Coordinator at the Roy Rosenzweig Center for History and New Media at George Mason University Amanda French and the Library of Congress’s Susan Garfinkel, who were eager to see it “introduced” widely to a general public.

Mounting an Exhibit of Electronic Literature at the Library of Congress 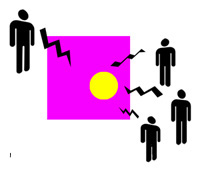 As Iwona Blazwick and Simon Wilson explain in Tate Modern:  The Handbook, “Works of art are rarely encountered in isolation.  They are experienced in relation to each other and articulated by the architectronics of a building and the unconscious choreography of other people” (31).  This approach to curating sees the curator, art, space, and audience colluding to produce an exhibit.  Years of curating also teach us that the curator is responsible for orchestrating as much of the experience as possible and, then, steps back, allowing the exhibit to unfold.  In the case of the Library of Congress, foundational as it is to American culture and the literary arts, the curator must make a mindful connection to the vast riches that the Library houses and match the beauty and grandeur of the space it inhabits.

The Library of Congress’s mission as the center of learning is clear: “to further the progress of knowledge and creativity for the benefit of the American people.”  What better way to demonstrate this concept of “progress” than with an exhibit focusing on what can only be called innovative literature and its evolution from print to electronic for both desktop and mobile environments?

The curatorial design of “Electronic Literature & Its Emerging Forms” responds to this mission.  We have organized the exhibit into three main sections that, taken together, make the argument that literature is a natural outgrowth of literary experimentation and human expression with roots in print literary forms and, so, constitutes an organic form generating from the dynamic human spirit that is evolving, will continue to evolve through time and medium.  Media from the Library’s collections are displayed on five “Context Stations” located on the left hand side of the space; electronic literature, displayed on five “Electronic Literature Stations” situated in the middle of space; and finally, materials provided for hands-on workshops on “Creation Stations,” available on the right hand side of the space.  As mentioned previously, the Context Stations are envisioned to show connections to and contextualize the experiments found on the Electronic Literature Stations. These stations are organized to the left, hinting to chronology and antecedents of form, and the Creation Stations suggest opportunities for visitors to engage actively with creating literary art, both print and electronic.

Showing the relationship between electronic literature and literary experiments generating from the print medium goes far in establishing electronic literature as a natural outgrowth of artistic experimentation not unlike that which has occurred in the print medium, e.g. cut up poetry or artist books.  The collections of works selected for exhibit along with electronic literary works, such as books, manuscripts, and other artifacts, offer a wealth of resources that help us make this case.  The Library’s edition of Laurence Sterne’s Tristam Shandy, on view from the Rare Book and Special Collections on Thursday, April 4, a novel criticized at the time of its publication for plagiarism, suggests remixing source texts.  This concept is connected to Jody Zellen’s “Spine Sonnet,” located on Electronic Literature Station #3, a generative poem that remixes titles of books found on their spine into sonnets.

Additionally, the exhibit is located in the Whittall Pavilion on the ground floor of the Thomas Jefferson Building, certainly one of the most elaborately decorative buildings of the 19th century.  Thinking through the layout and design of the space has prodded us to consider such details as using large screen iMacs for displaying the works and selecting specific colors for the wallpaper for computer screens.  All aesthetic decisions made about this exhibit have been thought through and carefully considered. 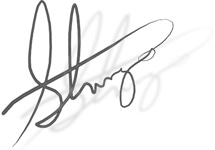 Most importantly, the conceptual framework developed for the exhibit has informed all decisions for the selection of works.  The Library of Congress’s stature as the nation’s library makes it apparent that the exhibit should focus on major American artists and influential pioneers working in any language and whose art fits the classic definition of electronic literature.  The Library’s appeal to a wide audience with more than 1.7 million onsite visitors each year and more than 77 million visits and 581.1 million page views on the it website means that the works chosen need to reflect a broad spectrum of genres and approaches, e.g.  kinetic poetry, hypertext fiction, animated graphic novels, augmented reality environments.  Finally, common to all works is the quality of “literariness,” whether it be articulated through the use of language, the presence of narrative or poetic elements, or as Hayles refers to as “creative artworks that interrogate the histories, contexts, and productions of literature, including as well the verbal art of literature proper” (4).

As visitors experience the exhibit and see the connections made between past and present works of literary art––where it has come from and where it has arrived––we invite them to think about where it is headed.  Literature is, like all of us, dynamic. Creator and the created, both evolving and emerging forms, organic and alive, always in a state of becoming.