A Weapon of Mass Instruction 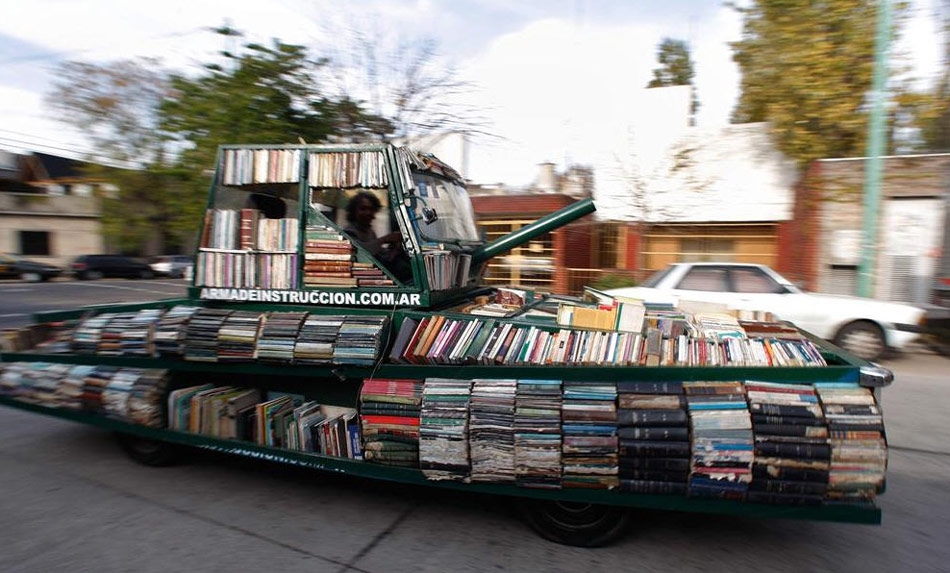 From a reader blog at the Seattle Post-Intellgencer:

Raul Lemesoff, an Argentine art-car artist, has taken a 1979 Ford Falcon that used to belong to the Argentine armed forces and turned into a Weapon of Mass Instruction.

Armed with 900 or so books Lemesoff travels the streets of Buenos Aires and beyond offering free books to all.

He sees his Weapon of Mass Instruction as a contribution to peace through literature.

Given the historical centrality of controlling, restricting, and shaping information to the waging of war, this has an appealing and subversive symmetry. Especially in Argentina, where the legacy of the disappearancesstate-ordered kidnapping and murder of over 10,000 citizens, covered up for decadesstill haunts public culture there, this reappropriation of the tools of violence and repression seems like it would be particularly powerful.

Plus, look at the thing!

[re-posted from my other blog, bookmobility.]

What I really enjoy about this besides the obvious awesomeness of transforming an old car into a bookmobile/WMI, is the immediate reaction one has upon seeing it.  As specific to Argentine culture and politics as this bookmobile may be, it speaks to viewers across language and culture divides, whereby we are meant to question our own interaction with or commitment to book technology. What is particularly striking about this image is the use of an old car to make mobile an "old" technology and the particular salience of these old technologies, visually.  Given the proliferation of "new" media, cars with computers, etc., I think viewers (or perhaps just Americans?) would be apt to ignore as a passing fancy a 2010 Prius covered in iPads.  Cool, but not thought inducing as much.  But an old car with old books?  Makes you wonder to yourself, have I read anything this week? Most definitely a great image.

Ooh, yes. I think the visual

Ooh, yes. I think the visual impact of the tank/bookmobile is (perhaps) surprisingly significant. I particularly like the way it turns the idea of a bookmobile, which since the 1940s have tended to have interior shelving, inside out, raising immediate and fascinating questions about the black-boxing of technology, for example.

Thanks for your thoughts!