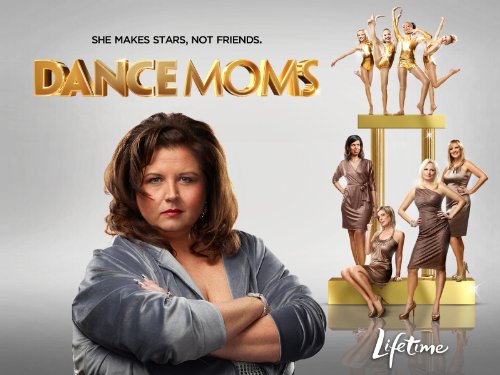 Dance Moms premiered on Lifetime in the summer of 2011 and is currently in the midst of its second season. The premise of the show is based around Abby Lee Miller (center, in the gray velour above) who owns and runs a dance studio in Pittsburgh. Part of that studio is the Abby Lee Dance Company, which is a competition team comprised of the dancers Abby deems talented enough to earn an invitation to join. The show follows that team of dancers and their moms as they deal with Abby on what appears to be a daily basis about topics ranging from the age-appropriateness of the girls' costumes to the girls' often-tearful reactions to Abby's harsh teaching techniques.

I don't yet have a cohesive argument to make about the show as a whole, so instead I am going to list some of the qualities that I find compelling. Hopefully this will start a conversation that will enable a more sophisticated, collaborative analysis than I am currently able to create independently.

Holly (Nia's mom) is the only mom who has a paying job (some Googling suggests that she's a principal at a private school). She is also the only mom of color on the show and the only one with a post-college education (she has a doctorate of education). There is frequent tension between Holly and Abby, as well as Holly and the other moms, in which Holly's education and busy work schedule are used as barbs and reasons for her daughter Nia's inability to "feel loved and supported" or dance as well as the other girls.

The other moms are portrayed as attending (and being expected to do so) every practice and sitting in a their designated loft area where they can watch their daughters dance while talking, sewing costumes, and, as is most often the case, fighting with one another. The show establishes the primary labor of these moms (with the exception of Holly) as negotiating between their daughters and Abby. Their job is to advocate for their daughters and to invest their time, money, and whatever power they can assert into achieving and maintaining their daughters' seemingly ever-precarious position in the company. This advocacy happens in a number of ways:

The codes of how the show attributes power are complex and always shifting. Abby is always the loudest and clearly the most confident in her position of authority, but she also is frequently portrayed as overbearing, harsh, and unkind. Some episodes suggest that the moms who are smart, patient, and forbearing are the most powerful, but the very next week they will get trampled over. Alternately, the moms who mimic Abby's behavior by screaming, fighting, and belittling one another are also usually portrayed as unsatisfied and regretful.

The most consistent source of power could be said to come from the girls themselves and the pyramid that Abby assigns them to; so, ultimately, it is Abby who has the most power, though sometimes the pyramid influences the girls' behavior in unexpected ways, suggesting a less direct line of power than Abby would prefer.

Every week, post-competition, Abby creates a pyramid on the mirrored wall of one of the studio rooms using tape and all of the girls' headshots. (You can keep up with the girls' positioning on the pyramid each week via the Dance Moms Wikipedia page.) She dramatically unveils one head shot at a time, explaining, more or less, how each girl "earned" their spot on the pyramid that week. The girls stand dutifully in a line during this process while the moms cluster off to the side, but are also expected to be in the room to hear about their daughters' placement. The reasoning behind these pyramid assignments is completely arbitrary and not exclusively related to their performances. On a recent episode, Kendall was placed on the bottom row of the pyramid because of her mom, Jill's, refusal to follow Abby's rules about costuming. Jill loudly contested this, saying that her decision shouldn't affect Kendall's placement, but Abby ignored her and Kendall's photo and position remained at the bottom. The one girl at the top of the pyramid is celebrated by her teammates and her mom is typically awarded as much camera time as she is while they both bask in the fleeting and rare warmth of Abby's approval.

The show devotes a fair amount of time to following the girls during rehearsals as they learn new choreography, week after week. Rarely are the girls shown in their home or school environments, and never outside of the context of dance (i.e. we see Brooke in her bedroom during a recent episode, but it's only to tape a conversation between her and her mom, Kelly, about whether or not Brooke will quit dance to try out for cheerleading). The physical strength and artistic talent of the girls is rarely remarked upon or featured in a way that would indicate it to be anything out of the ordinary. The moms and Abby throw around token phrases of admiration occasionally, but the majority of the girls' dancing is taken for granted by the narrative constructed on the show.

The moms are clearly devoted to their daughters, as demonstrated visibly through their courting of and negotiations with Abby, but the girls themselves are their own biggest cheerleaders. After a round of competition, when the girls meet up in their dressing room, they are all squeals and hugs, celebrating each others' performances. They are also sweetly supportive of one another during the grand pyramid reveal each week, usually hugging and congratulating the girl who earns the top position. As is normal considering their approximate age range of 7-10, the girls often display emotional fragility and cry during stressful rehearsals and cling to their mothers for support. However, less normal is the maturity and resilience they more often demonstrate in the face of extreme pressure (inflicted by Abby and their mothers) at competitions and during lectures at the studio from Abby.

As Abby said during a confessional on episode 7, "Bullets and Ballet," of season 2: "I produce employable, working dancers, not competition kids." The distinction Abby is drawing in this statement is one that separates the labor she performs and the work that her dancers perform by training to become "stars" rather than simply successful at filling the studio's trophy case, though the two seem to go hand-in-hand. The separation comes in that Abby justifies her harsh training methods and zero-tolerance-for-tears policy by understanding these children as working professionals.

She demands complete authority in her studio, treating anything interpreted as insubordination or disrespect from the girls or the moms with temper tantrums of epic proportions. However, she is upfront and clear about this being the terms of engagement. Abby never pretends to position herself on the same level as either the moms or the girls; her mantle of power is never a burden to her. Abby will confidently assert her "over thirty years of experience," track record of producing successful dancers, and talent as a choreographer and teacher to anyone who seems even slightly doubtful, forgetful, or uninformed.

Abby's confidence and power as a businesswoman and educator is attractive, but is ultimately mitigated by her equal eagerness to humiliate, belittle, and insult her dancers and their mothers. This behavior might suggest some hairline cracks in her brash self-presentation, but Abby positions herself as powerful because she is willing to say and do whatever is necessary in order to maintain the authoritative structure she believes as integral to the successful functioning of the studio and company.

In short, Dance Moms has a lot going on. I've still got some questions:

What constitutes acceptable labor within this setting, and how are those terms created and communicated?

How do we understand the constant jockeying for power among the moms as a group and between the moms and Abby? How is power attributed, wielded, and revoked? Or, how does the dance studio function as a workplace and domestic sphere at once?

How are issues of race, class, gender, and sexuality addressed or elided?

What is considered to be nurturing for girls? How is childhood and, more importantly, girlhood constructed on the show? How does power inform the relationships among the girls as teammates and between the girls and Abby?