A new post about Zynga's Frontierville over at the Critical Gaming Project @ UW blog called "Frontierville, a Casual Queer Reading":

What is important here is not that video game studies is suddenly realizing that games are being played by people, that games are being shared between people, and that games are played across communities, social locations, cultures, even politics.  What is important here is to take Juuls definition of social embeddedness and extend it, adding it to something like Alexander Galloways claim that video games render social realities in playable form (Gaming 17) or Constance Steinkhuelers argument that games are a mangle of production and consumptionof human intentions (with designers and players in conversation with one another), material constraints and affordances, evolving sociocultural practices, and brute chance (Mangle of Play 200).  In other words, the social embeddedness is about more than just an interesting experience but more importantly about what players add to the game in terms of social, cultural, and economic constraints and affordances.  What the players bring to the game, what the players get out of the game, and what the game mediates requires close attention and careful close playing. 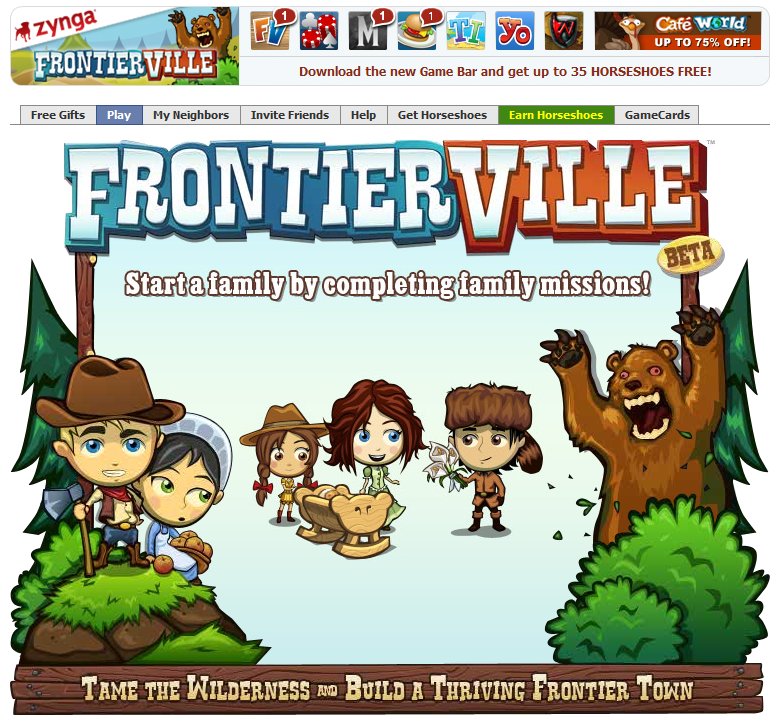 So, I turn to a simple but telling example: Zyngas (newish) game Frontierville, which is described by the game companys site where players can: Build a sweet lil homestead, a big ol family and a boomin frontier town! and Explore a new life on the frontier. In the untamed wilderness, frontier settlers join fellow pioneers to chop trees, raise livestock, and plant crops.  The Zynga formula, for which the game company has been both praised and reviled, holds true for Frontierville.  The game promises a symphony of pointing-and-clicking.  Like other Zynga games, playing the game amounts to dollhouse management, a kind of spreadsheet-skinned-as-video game sort of play, clicking on in-game items (e.g. plots of land, decorative features, animals, building).  Each click then represents an action: plowing, planting, harvesting, petting, moving, deleting, and so on.  The game capitalizes on the very kind of usability and user-interface literacy that has become naturalized by the web and by applications like Microsoft Office. It makes sense then why games like Frontierville are so user friendly and popular among casual gamers, particularly those who spend a lot of facetime with a computer screen.

Whats new about Frontierville, though, is Zyngas attempt to make the game more game-like.  Unlike its predecessor Farmville, Frontierville is better looking, offers a wider variety of point-and-click tasks, and pushes a more robust quest system requiring collaboration from neighbors (friends who are also playing the game).  In fact, it is said that Zynga wanted Frontierville to be even more social, almost to the point where if a player does not have a sufficient number of neighbors, the game is nearly unplayable given the vast number of clicks-to-gift and clicks-to-return needed by the games quest economy.  The irony here, of course, is that in order to make the game more like a game, Frontierville must in a sense sacrifice its casualnessthe very thing that draws players to the game in the first place.

But game mechanics aside, Frontierville also reveals a more troubling mangle.  Beginning with its name to the cartoony caricature of frontier life and inhabitants, the game on the one hand evokes a particular historical and geographical moment (American colonial history, manifest destiny, settling of the North American West) and the romanticized, nostalgic images and narratives of prairies, settlers, cowboys, log cabins, and simpler times.  Beginning the game is rough and tough because you have few resources and you must clear the lad and safeguard it against varmints (like rattlesnakes, foxes, gophers, and bears).  However, as the game waxes, if you can persevere and tame the wild west, you too can raise a family and found a boomin town.  Granted the game is ripe for sociocultural analysis given its rather whitewashed history and politics.  I have to ask: Where are the Native Americans in all of this?