Samuel Delany On Importance of "Everyone Raising Their Hand"

“Don’t you realize that every time you don’t answer a question, you’re learning something? You’re learning how to make do with what you got, and you’re learning how not to ask for a raise…you’re learning how to take it. That’s not good!... So, from now on, whenever I ask a question, everybody’s got to put their hand up. I don’t care whether you know the answer or not. You have to put your hand up…I’m going to call on you and if you don’t know the answer, I want you to say nice and clear: ‘I don’t know the answer to that, Professor Delany, but I would like to hear what that person has to say. And we’ll pass it on. And so this is what we started doing. And I said, whenever I ask a question, everybody put their hand up. I don’t care whether you know or not…You need to teach people they are important enough to say what they have to say.’   So now I do that, I ask everyone to raise their hand.”  -

--An interview with Samuel Delany in "The Polymath."

His fiction includes Babel-17, The Einstein Intersection (winners of the Nebula Award for 1966[3] and 1967[4] respectively), Nova, Dhalgren, the Return to Nevèrÿon series, and Through the Valley of the Nest of Spiders. His nonfiction includes Times Square Red, Times Square Blue, About Writing, and eight books of essays. After winning four Nebula awards and two Hugo Awards[5] over the course of his career, Delany was inducted by the Science Fiction and Fantasy Hall of Fame in 2002.[6] From January 1975 until his retirement in May 2015,[7][8] he was a professor of English, Comparative Literature, and Creative Writing at SUNY Buffalo, SUNY Albany, and Temple University in Philadelphia. In 1997 he won the Kessler Award, and in 2010 he won the third J. Lloyd Eaton Lifetime Achievement Award in Science Fiction from the academic Eaton Science Fiction Conference at UCR Libraries.[9] The Science Fiction Writers of America named him its 30th SFWA Grand Master in 2013.[10]

Samuel Ray Delany, Jr.[a] was born on April 1, 1942, and raised in Harlem. His mother, Margaret Carey Boyd Delany (1916–1995), was a clerk in the New York Public Library system. His father, Samuel Ray Delany Sr. (1906–1960), ran the Levy & Delany Funeral Home on 7th Avenue in Harlem, from 1938 until his death in 1960. The civil rights pioneers Sadie and Bessie Delany were his aunts. He used their adventures as the basis for Elsie and Corry in "Atlantis: Model 1924", the opening novella in his semi-autobiographical collection Atlantis: Three Tales. His grandfather, Henry Beard Delany, was the first black bishop of the Episcopal Church.

The family lived in the top two floors of a three-story private house between five- and six-story Harlem apartment buildings. Delany envied children with nicknames and took one for himself on the first day of a new summer camp, Camp Woodland, at about the age of 12, by answering "Everybody calls me Chip" when asked his name.[2] Decades later, Frederik Pohl called him "a person who is never addressed by his friends as Sam, Samuel or any other variant of the name his parents gave him."[2]

Delany attended the Dalton School and, for two months out of each summer for five years, from 1951 through 1956, attended Camp Woodland in Phoenicia, New York,[11] followed by the Bronx High School of Science, during which he was selected to attend Camp Rising Sun, the Louis August Jonas Foundation's international summer scholarship program. 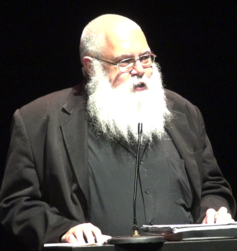 At a reading at The Kitchen in June 2011

Delany has identified as gay since adolescence,[12] though his complicated marriage with Hacker (who was aware of Delany's orientation and has identified as a lesbian since their divorce) has led some authors to classify him as bisexual.[13]

Upon the death of Delany's father from lung cancer in October, 1960 and his marriage in August 1961, he and Hacker settled in New York's East Village neighborhood at 629 East 5th Street. Hacker's intervention (while employed as an assistant editor at Ace Books), helped Delany become a published science fiction author by the age of 20, though he actually finished writing that first novel (The Jewels of Aptor) while at 19, shortly after dropping out of the City College of New York after one semester.

Samuel R. Delany - Through the Valley of the Nest of Spiders

A while back I video'd a Chip Delany reading at St Mark's Bookshop in NYC.