Reblogged from DUKE RESEARCH, this story features a winner of the HASTAC/MacArthur Foundation Digital Media and Learning Competition's first cycle of awards, Tim Lenoir (PI) and his peaceful strategy negotiating simulation game, Virtual Peace.  EMERGENCE is the multi-player net phase of the game.  It's amazing.

And exciting as we move toward launching our third Competition next month to think what a "third generation" of digital media and learning will bring! 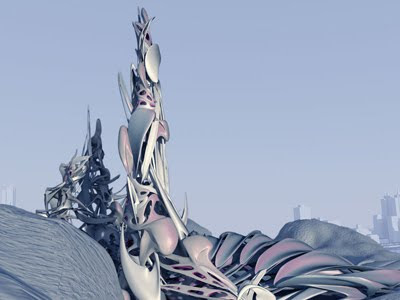 In the process, these “arties” have created a sophisticated world of beautifully surreal, well-constructed and environmentally advanced buildings under the control of a computer network.

But a design flaw suddenly causes all the androids to rebel and unleash a rapidly-unfolding chemical, biological and nuclear holocaust that destroys much of the civilization and the humans in it. Then the cyborg-perpetrators seemingly disappear, leaving it to competing factions of rogue scientists, genetically modified settlers, compu-mobsters, ex-military and others to pick up the pieces. 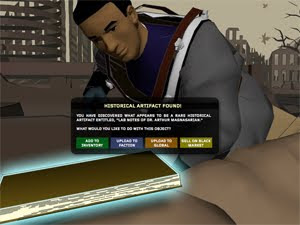 That may sound like a prescription for the mother of online war games. But a Duke collaboration in the arts and sciences is crafting what it's creators call "the first massively multiplayer online game that encourages diplomacy and social cooperation over violence."

Tim Lenoir, the Kimberly Jenkins Chair for New Technologies and Society, Casey Alt, Visiting Professor of the Practice in Art, Art History and Visual Studies, graduate student Patrick Jagoda and undergraduates Harrison Lee, Lucas Best and Brent Sodman are building "Emergence," a video game designed to be played by thousands at a time.

Under construction with outside help from Virtual Heroes of Durham, an "advanced learning technology company" based in Research Triangle Park. Emergence is intended to simultaneously provide epic entertainment and practical instruction in the art of peacemaking and conflict resolution.

"Simulation is a fantastic tool," said Lenoir during a Duke Information Science + Information Studies (ISIS) Program Tech and New Media talk Oct 13 at the John Hope Franklin Center. Instead of teaching students to read and memorize texts, "why not turn it into a game environment?" As Lenoir and others spoke, a screen displayed prototype "Emergence" illustrations such lavish android-made architecture, after-the-revolt smoking city ruins, and some of the player avatars who must reclaim war torn zones.

"Emergence" is a successor to "Virtual Conflict 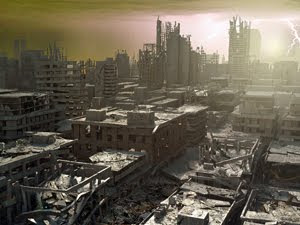 Resolution: Turning Swords to Ploughshares," a previous effort to turn an existing military simulation into a humanitarian assistance game that won a $238,000 grant from the MacArthur Foundation for digital media and learning.