Filippo Minelli's "Contradictions" spreads the logos of the digital ageto the scrap heaps (sometimes literally) and shacks and backwaters ofthe impoverished and un-connected Third World whose labor supports theInformation Age, places where digital pollutants and detritus serve to exacerbate the conditions of poverty and disease.

Here is a reblog from The Wooster Collective ("a celebration of street art"), a fantastically rich, varied, and interesting site. Check it out: http://www.woostercollective.com/. 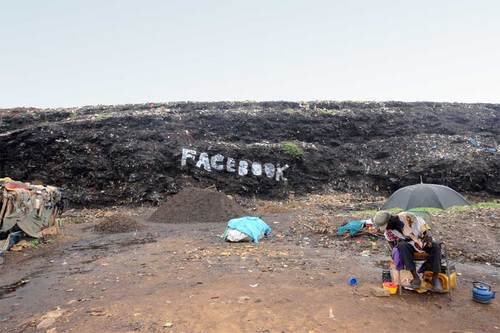 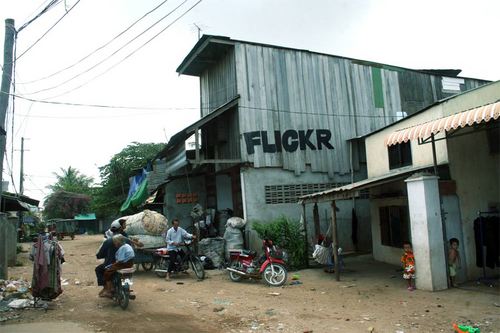 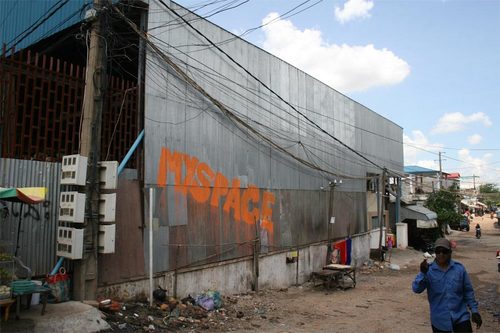 The more we see of Filippo Minelli's work, the more we've love it.We were really struck by his ongoing series "Contradictions" so weasked Filippo to tell us a bit about the images. We thought we'd sharewith you his response:

"All my "Contradictions" ongoing project has the samemotivation/meaning. Technologies and the marketing behind them usuallypush the almost religious aspect of their evolution, as also said byLeander Kaheny in his "Cult of Mac" book, and the users are pushed tolive in an intense way the abstraction from reality, livingtechnologies only as an idea and sometimes without even knowing theirreal functions. And this aspect works for the social-networks too. Theidealization connected with these experiences provokes asmall-but-important detach of the perception of reality and what i wantto do by writing the names of anything connected with the 2.0 life weare living in the slums of the third world is to point out the gapbetween the reality we still live in and the ephemeral world oftechnologies. It's a kind of reminder, for people like me which i'm anApple user and also have social-network accounts that the real world isdeeply far from the idealization we have of it, not only in the thirdworld and even if technologies and globalization are good things. Ihope it's clear and sorry for my italian-english" ;)"

You can see more of Filippo's work here.

Posted by marc at 5:04 AM in Environmental

You can see more of Minelli's work here: http://www.filippominelli.com/ And a shout out to my friend Tyler for sending me this link this morning!

From Filippo Minelli to Jordi Colomer

The following description is from the Pompidou Center's Encyclopedia of New Media, which is itself an interesting resource:

Shot at the beginning of 2005 during a stay in the Yemen, the film Arabian Stars
stages Yemenite citizens crossed according to the journey. The characters
agreed to get caught up, to walk in front of the camera by holding cardboard
colored posters, on which are handwritten in Arabic the names of famous, real
and fictitious, international and local characters (Michael Jackson, Pikachu,
James Bond ou Zinedine Zidane but also the singer Abo Bakr Saalem, the poets Al
Zubeiri ou Albaradoni, the minister of human rights Amat al-Alim al-Susua