Pam Spaulding, the extraordinary unpaid political blogger, tireless andfearless and generous--she's given us at HASTAC workshops on effectiveblogging--is the first person quoted in a NY Times article, "The Yearof the Political Blogger Has Arrived." Here's the url for this articlethat http://www.nytimes.com/2008/08/24/fashion/24blog.html?hp paystribute to the person we've always known was a goddess! (Local note of interest: photograph by local indy, prize-winning photographer Jeremy Lange).

WHEN Pam Spaulding heard from two contributors to her blog, Pam?s House Blend, that they couldn?t afford to attend the Democratic National Convention, she knew that historic times called for creative measures. 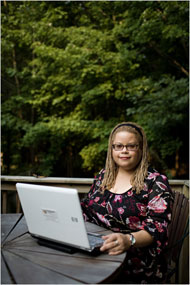 UNPAID HOBBY Pam Spaulding called on readers to help her get to the Democratic convention.

Getting convention credentialsfor her blog, a news site for the gay, lesbian, bisexual andtransgender community, was the easy part. As air fare, lodging andincidentals began piling up, paying for the trip to Denver became thebigger obstacle.

For Ms. Spaulding, 45, who works full time as an IT manager at Duke UniversityPress in Durham, N.C., blogging is her passion, an unpaid hobby shepursues at nights and on weekends. So she called on her 5,500 dailyreaders to help raise funds: ?Send the Blend to Denver? reads theChipIn widget on her blog?s home page that tracks donations fromreaders; so far they have pledged more than $5,000 to transport Ms.Spaulding and three other bloggers to the convention.

Beginning Monday, hundreds of bloggers will descend on Denver to see Barack Obama accept his party?s nomination. Next week, hundreds more will travel to St. Paul to witness John McCain?s acceptance speech at the Republican National Convention.But now these online partisans, many of whom are self-financed, mustcontend with all the logistical and financial hurdles just to get there? not to mention the party politics happening behind the scenes.

Thisyear, both parties understand the need to have greater numbers ofbloggers attend. While many Americans may watch only prime-timetelevision broadcasts of the convention speeches, party officials alsorecognize the ability of bloggers to deliver minute-by-minute coverageof each day?s events to a niche online audience.

?The goal is tobring down the walls of the convention and invite in an audience that?sas large as possible,? said Aaron Myers, the director of onlinecommunications for the Democratic National Convention Committee.?Credentialing more bloggers opens up all sorts of new audiences.?

Butsome bloggers see the procurement of credentials as less of a privilegeand more of a right, in recognition of their grass-roots influence.?This is stuff we deserve ? we helped the party get people elected,?said Matt Stoller, a political consultant and a contributor to the blogOpen Left, who worked as thevolunteer in charge of getting credentials for bloggers at theDemocratic convention four years ago. ?Maybe in 2004 it was about beingaccommodating and innovative ? but this time around there?s a realfight for power in the party.? The major political parties first gavecredentials to bloggers in 2004. The Republicans allowed a dozenbloggers to attend their convention in New York, while the Democratsgave bloggers 35 seats in the nosebleed section of the Fleet Center inBoston.

This year, the R.N.C. gave credentials to 200 bloggersas a means to ?get Senator McCain?s message out to more people,? saidJoanna Burgos, the press secretary of the convention.

For bloggers attending the Democratic convention at the PepsiCenter in Denver, two types of credentials are offered. The first is anational credential, which offers the same access granted to members oftraditional news media organizations.

The second, more covetedcredential is the state blogger credential. It allows one blogger perstate to cover the convention alongside its state delegation, withunlimited floor access. Inspired by the strategy of Howard Dean,the D.N.C. chairman, to organize in all 50 states, the state-bloggingcredential was highly sought after, with as many as 14 blogs vying torepresent a single state.

D.N.C. organizers said the recipientsof these credentials were chosen by looking at the posts and missionstatements of the competing blogs, and at the traffic these sitesgenerated. But controversy soon arose in the blogosphere about whetherpolitical favoritism played a role.

?It?s a recognition from theD.N.C. of the work that you?ve done, of your import, yoursignificance,? said Phillip Anderson, 38, whose blog, the Albany Project,has covered New York State politics since 2006. ?We were the site theD.N.C. was talking about ? we just assumed we would get it,? said Mr.Anderson, who received a national credential instead of the statehonor.

Mr. Myers of the Democratic National ConventionCommittee conceded that tough calls had to be made. ?Nobody here,certainly not I, believes there?s only one good blog in every state,?he said. ?It?s just not true.? In the last week, the D.N.C. released anadditional 100 credentials that will allow multiple contributors fromthe same blog to cover the convention in tandem.

But the last-minute disbursement of credentials has only exacerbated many bloggers? frustrations.

The annoyance felt by many bloggers is familiar tothose who previously attended conventions as correspondents for smallerprint publications. ?This is very reminiscent of being at the low endof the totem pole,? said Micah Sifry, the co-founder of the group blog Techpresident.com,who formerly wrote for The Nation magazine and attended his firstconvention in 1984. ?They can?t buy a sky box, they?re scrambling.?

Oneperk that bloggers will have access to in Denver is the Big Tent, an8,000-square-foot two-story structure adjacent to where the conventionis being held. For a $100 entrance fee, 400 credentialed bloggers willbe allowed to enter the air-conditioned space, hosted by a coalition ofprogressive blogs and organizations and sponsored by the Web sites Google and Digg, where they can eat meals and find work spaces with Wi-Fi.

?I?mtelling everyone to meet me at the Big Tent,? said Fred Gooltz, 30, anonline strategist with Advomatic, a Web development and strategy firm.?That?s where I?ll be meeting everyone else who?s like me, folks thatI?ve only met online or blogged and e-mailed with.? Mr. Gooltz sees the$100 fee as a bargain, especially since he would rather network ?withmovementarians, who see themselves as a progressive movement, separatefrom the Democratic Party hierarchy.?