Reblog from NY Times, "Two Students, Four Stars": What if we Adapted this Participatory Model to Kids and Software Developers?

This delightful and insightful article takes kids from a public high school to a four-star restaurant and records what they see and what is invisible to the gourmand adult. Why not do this for software developers?
May 1, 2007, 6:39 pm 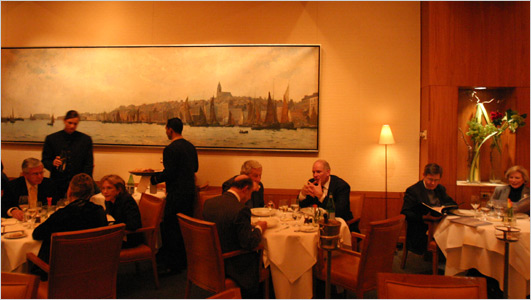 How does a four-star restaurant look through the eyes of a New York teenager eating at one for the first time?

I set out to find the answer with two students who weren?t happy about how I had portrayed them in an earlier story in the Dining section.

They are students at Food and Finance High School, the city?s first high school dedicated to mixing culinary education and academics. Overall, I heard through their teacher, they liked the story. But a couple of things really bothered them.

I started out my story by saying that Brooke Arce would not be eating at Le Bernardin any time soon. I pointed out that she, like most of her classmates, came from low-income families. But, I wrote, she might work there one day.

Why, Brooke wanted to know, did I say she would work there as opposed to own it one day? And why did I have to point out income levels? She thought some of the reasons might have had to do with race. Brooke is half-African American and half-Puerto Rican. (Race had absolutely nothing to do with it, but I can see how she might interpret things that way.)

They also wanted to know why in the world I picked Le Bernardin, a restaurant they had never heard of. (Simply because it was the closest four-star restaurant to their school, and one people would easily recognize.)

Rebecca Rios, the other teenager in my story, wanted to know how I could spend only two days at their school and then write a story that sounded like I knew them. (Welcome to the exciting world of daily journalism.)

I decided the best way to remedy the situation was to let the girls speak their minds over lunch at Le Bernardin, with a little private kitchen tour to follow.

We had the best time. The girls opened my eyes to how both the world and Le Bernardin look when you?re 15 and new to both journalism and four-star dining.

During lunch, they noticed things I usually don?t. Two people open the big doors leading into the restaurant. The move creates an instant transition between the street and the restaurant space that was particularly magical, they thought.

?It looks like somewhere Donald Trump would eat,? said Brooke.

They were in awe of how the waiters worked together so effortlessly, and got a lesson in the hierarchy of the dining room. They learned what a table captain does and why the sommelier wears a tastevin around his neck. (He said it was for tasting wine at tableside and that long ago it was used to reflect candlelight in dark cellars so sommeliers could find the right bottle.)

Brooke, watching the endless plate and silverware changes, asked the waiter what happens if the dishwasher breaks. (A teacher had told her that when you own your restaurant, you end up doing everything sometimes, even washing dishes.)

The answer? They have two ? one just for glasses and one for everything else. If one breaks, the other can be used as a back-up. And, our waiter pointed out, if something happens they can have someone to repair it at the restaurant in 20 minutes.

They loved the attention to detail. They ooohhhed over the way sauce was poured over a slice of fish tableside and loved the way waiters replaced napkins when someone went to the bathroom, or used linen to cover spilled sauce.

Rebecca, who is part of an after-school catering club at her school, said the service at Le Bernardin made her realize that, while the catering club service is good, it could be better.

?Everything here is so precise and systematic,? she said. ?It makes everyone feel like they?re special and the service is just for you.?

My young guests ordered particularly well, and like serious food students usually do, scribbled notes as every dish arrived at the table (O.K., I had given them the notebooks, but still ?)

After a few jokes about eating Nemo, they settled into reviewing. Brooke likes crab but hates cauliflower. That is, until she tasted a dish of warm Peekytoe and Maryland lump crab with shaved cauliflower and a light coat of Dijon emulsion. Rebecca ordered a skate wing because it had jalapeño and mango salad, two flavors she thought would go nicely together.

Even the bread program impressed them. Rebecca liked how both the olive rosemary stick and a slice of fruit bread both worked with each dish.

The sodas kept coming, and so did the dishes. They had their first taste of fish eggs ? crunchy tobiko dyed green with wasabi ? but the biggest challenge of the day was a small, black plate of braised baby octopus with a purée of black trumpet mushrooms and sauced with a wine-squid ink infusion.

Rebecca bravely forked into it. She liked it!

?This dish proves a point to never eat with just your eyes,? she said.
Brooke was a little more reluctant. But in the name of educating her palate she acquiesced and swallowed a tentacle.

?I can?t believe I am eating an octupus leg,? she said.

We had a long talk about a salad of grilled bacalao, a technique that Brooke thought gave the salted cod a nice, homey flavor. Her grandmother from Puerto Rico used bacalao to make a kind of potato salad. Rebecca explained how in Mexico, she?s had the same fish with olives, chilies and tomato. It was a salted cod ?We are the World? moment.

?It?s all how you express yourself through an ingredient,? said Rebacca, warming up to the role of food critic.

Brooke?s final assessment? ?I?d give this an A plus plus, unless there is a letter before A.?

We also got to learn a little something about making mistakes. One plate had a small, wing-flapping fruit fly stuck in the sauce. The girls were horrified, more out of concern for the kitchen than the bug or our pleasure. We decided to point it out to the waiter, if only for a good lesson in how to handle tough situations.

The waiter whisked the plate away, apologized and got another dish out to us within minutes.

Afterward, he explained that the chef would always like to know if something is wrong so he has a chance to correct it.

The same goes for journalists.