"I Know You and I Haven't Even Met You": Oversharing on Social Media 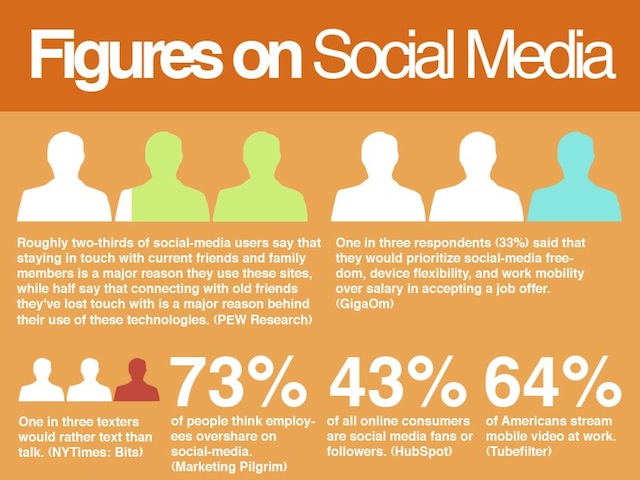 [Image result for photos of oversharing]

Are you an Over-Sharer?

Most people rarely ever realize how much they post on a daily basis and the content of what they actually post. In this new technological age, many individuals have become very consumed with posting their everyday moves and sharing with the world the most intimate components from their lives. Social media, such as blogs and social network sites like Myspace and Facebook, which may be fully open or available only to a network of personally identified ”friends,” also seem to push the borders between private and public to which we are accustomed in the context of face-to-face encounters, given that some users make their private lives public through these media. (Persson, 2010)

Before we get into the nitty gritty of oversharing, reflect on these questions and identify if you see yourself responding YES to any of these questions:

1)    Do people in your life complain about how much time you spend on your phone when you’re with them?

2)    Has your job/school performance suffered due to time spent using social media?

3)    When you wake up in the morning, is the first thing you reach for your smartphone?

4)    Is no meal complete without it being Instagrammed?

5)    Do you check your email or social network while using the restroom?

Whether it be on Facebook LIVE, SnapChat, or immediate photo upload our society wastes no time to expose and exploit our own personal lives. But WHY? Is the question, I have for today’s social media users? How did we transition from a society that was once so private and had the mentality “What happens in this house stays in this house!” to a society that feels compelled to one that now records and posts every single thing.

The above screenshoted images were taken from Instagram Live and Instastory, they show real life examples of individuals showing off their various aspects of their everyday lives, just about every few minutes or every hour. These images exemplify that it’s not simply a small number of people that engage in this activity, but it’s the vast majority.

So many people can have a different idea of what oversharing actually is. To some sharing your date of birth maybe a too explicit and to others that may seem as normal, and not at all evasive. Below is a compiled list of what are the most common examples of oversharing that researchers see on social media sites.

Posting your complete date of birth

Announcing vacations or when you’re away from home

Posting your every move including what you had for breakfast, lunch and dinner

Sharing pictures of inappropriate situations such as being intoxicated, showing too much “skin”, being with people or places you shouldn’t be, etc.

Posting about your financial situation

Sharing every little accomplishment your children have achieved

Posting the same content over and over 50 times per day

Why do People Overshare?

Oversharing can consist of a multitude of differing factors, such as sharing birthdates, addresses, and even current mental states. What it boils down to is the need to post more intimate discreet parts of our lives, that until recently people wouldn’t find acceptable to share with an online network of strangers. Politics, finances, and simplistic everyday occurrences are things that are seen to be public or not discussed openly, but are things often seen and exploited on Social Network Sites. “This discussion requires us to think deeply about a key issue addressed by postmodernism. Is there a stable, solid core self or is the person, in effect, a “subject position,” an over sharer who constructs his/herself to fit the situation—a vegetarian on Tuesday, a Republican on Wednesday, a swinger on Friday?  Players tell you what you want to hear; they are involved in sales or marketing—here the marketing of the self. (Agger, 2016) How one wants to be perceived the public eye is a heavy contribution as to why they choose to share on various social media platforms.

As previously stated, social media users often wants to fit in with the who and what is going on in the most current events. Many individuals, especially those of the younger generation find refuge in social media and being able to express a side of themselves they couldn’t normally do in a person. “Teens’ efforts to control their self-presentation—often by donning clothing or hairstyles their parents deem socially unacceptable or engaging in practices that their parents deem risky—are clearly related to their larger effort at self-fashioning and personal autonomy.” (Boyd, 2014)

As one person posted, another would follow looking to join on the bandwagon, and protrude this inner self image that they normally would not portray outside of social media. This caused for a lot of controversy and conflict within social media platforms, but did not stop or limit people from continuing.

Studies have shown that there are two main reasons one chooses to overshare, one being the need to be an idea starter or a thought leader. People thrive knowing that they are the starters of a movement and they have a following. Even simpler than that people just love to receive attention. It goes as simple as to people even posting provocative pictures of themselves. Although there is not an actual message being displayed, there is an underlying message being displayed. People want to feel that someone notices them in some ways and that’s what drives them to continue. The more likes you get on a picture, the more you are inclined to post. The more retweets you get on talking about your love life, the more likely it is you will continue to the post the most intimate details of your relationships.

Researchers who conducted a study at Lund University  found that the heavy oversharing on social media often blurred the lines between relationships with colleagues in the workplace. It is very common that individuals in their work setting exchange social media information, resulting in work relationships to expand to outside personal relationships as well.    Photos exchanged through Snapchat, Instagram, and Kik convey a sense of being with each other and reinforce shared emotional experience across time and place. (Hjorth and Hendry, 2015)

Authors who conducted research in a separate article wrote “It is important to note that the audiences on social media sites comprise a blend of friends, colleagues, supervisors, clients, and sometimes strangers” (Zhao & Rosson, 2009). Most online profiles are not the most accurate representations of individuals as themselves and who they are as professionals. The study analyzed that many images and post, professionals make is just their social media perspective. Other colleagues seeing this different side, definitely draws them in closer because it is most likely a different persona of what’s been portrayed in person. This seems to be most common amongst young professionals, due to the fact that they are still at the beginning stages of adulthood, they are still looking to find their identity and separate their “personal” and “professional” lives from their online world. [Image result for photos of oversharing]

What will it take to make it stop?

The over exuding of personal information on social platforms can cause for strangers to be given a direct pathway into your life. Sharing your birthdate, where you live or work can also make you extremely susceptible to identity theft and other evasive attacks on personal attributes. It can also be a cause to lose jobs and lessen work relationships with higher up staff. Having professional colleagues be completely engulfed in your personal life could cause the lines between “personal” and “professional” conversations within the workplace to blur and the amount of professionalism to decrease. All in all, our society should learn to be a little more mindful when it comes to what we post on social media platforms. You’re never aware of who’s watching and the effects it could have on you later down in the road.

Next time you feel the need to overshare, ask yourself these questions: Why am I sharing this?

What outcome am I hoping for?

What emotions am I experiencing?

Do my intentions align with my values?

Is there an outcome, response, or lack of a response that will hurt my feelings?

Is this sharing the service of connection?

Am I genuinely asking the people in my life for what I need?

Agger, B. (2016). Oversharing: presentations of self in the Internet age. New York: Routledge.

Persson, A. (2010). Front- and backstage in "social media". Paper presented at XVII World

Congress of Sociology, arranged by the International Sociological Association (ISA)

"Pause Before Posting: The Benefits of Not OverSharing on Social Media." World of